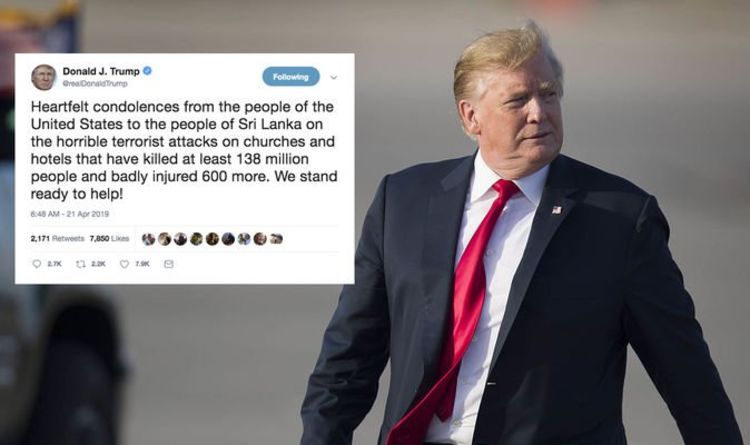 He has egg on his face again.

President Trump tweeted his profound sympathies to the 21 million citizens of Sri Lanka, where an Easter terror attack killed at least 200 people. However, Trump wrote “138 million” people had been killed, which would be six times the southeast Asian island’s population.

“Heartfelt condolences from the people of the Unite States to the people of Sri Lanka on the horrible terrorist attacks on churches and hotels that have killed at least 138 million people and badly injured more. We stand ready to help!” he initially tweeted. The mistake was first caught by USA Today.

Trump later changed his tweet to reflect that 138 people had been killed in the bombings, which more accurately reflected the estimates making the rounds Sunday morning. He then went on to complain about Special Counsel Robert Mueller’s report, released Thursday, which paints the President in a largely negative light, but stops short of recommending criminal prosecution.

Eight bomb blasts set off across Sir Lanka brought mayhem to the country Sunday as churchgoers observed the Easter holiday. According to early dispatches, three hotels and three churches were targeted in the coordinated attacks.

The president is frequently accused of inflating numbers, whether dealing with his personal wealth, golf scores, immigration, raises given to U.S. military members or supporters who attend his events. His lawyer, Rudy Giuliani, told Sunday’s “Meet the Press” the President is as truthful as he can be in today’s world of media scrutiny.

“If you say four and its actually five they say you’re lying,” Giuliani argued.