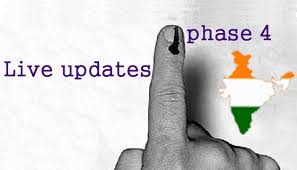 Sporadic incidents of violence marked the first two hours of polling in West Bengal. There were reports of a clash between TMC and BJP workers outside a booth in Barabani in Asansol, following a tiff between sitting MP and BJP candidate in Asansol, Babul Supriyo and polling officials inside the station, an Election Commission source said. Supriyo’s vehicle was also reportedly vandalised in the clash, he said. However, an EC official said by and large, polling has so far been peaceful.

A Kolkata-based lawyer has filed a petition in Delhi HC to disqualify PM Narendra Modi and Nitin Gadkari’s affidavits to contest Lok Sabha elections. According to the petitioner, the prime minister didn’t disclose the pending criminal cases against himself.

He claimed there is an ongoing CBI inquiry on alleged corruption in allowing E-rickshaw manufacturing licenses to companies. Inquiry after an NGO approached the Guwahati HC.

The petitioner said PM Modi has not declared that he is named in the complaint for which inquiry is ongoing.

Voting for the fourth and final phase of polling for 6 Lok Sabha and 41 Assembly constituencies in Odisha began this morning amid reports of technical glitches in Electronic Voting Machines and Voter Verified Paper Audit Trail (VVPATs) machines leading to severe disruption.

Officials in Chief Electoral Officer said 17% of the voters had cast their votes by 11 am.

Over 29 per cent voting was recorded in the first four hours of polling in 13 Lok Sabha constituencies in Rajasthan which began at 7 am on Monday.

The Barmar parliamentary constituency recorded the maximum voter turn out of 33.53 per cent, while the overall voting percentage at 11 am was 29.40 per cent, according to the office of the chief electoral officer.

The Congress and BJP are going to face each other again Rajasthan in the Lok Sabha election after the grand old party came back to power following a tight contest in last year’s assembly polls in one of the key states in the Hindi heartland.

In the last general election, the Bharatiya Janata Party won all the 25 Lok Sabha seats in Rajasthan and in the 2018 November-December assembly poll the Congress bagged 100 out of the 200 state seats and BJP 73.

Madhya Pradesh recorded around 11.39 per cent voting in the first three hours of polling for the six Lok Sabha seats in Madhya Pradesh on Monday till 10 a.m., officials said.

In 2014, the Bharatiya Janata Party had won five seats barring Chhindwara, which was won by Congress’ Kamal Nath.

The Supreme Court has issued a notice to EC and Centre on a PIL seeking to decriminalise complaints on malfunctioning of VVPAT/EVM, which at present entails jail term and fine if complaint found false.

Recently, a retired senior police official said he found certain discrepancy in VVPAT but did not have courage to complain as falsity of such complaint would have led to imprisonment and heavy fine.

BJP MP Babul Supriyo alleged that the Trinamool Congress is trying to influence voters and have stationed their people at booth numbers 171, 199, 223 and 224 in Jamuria constituency.

Rufta Bibi (42) from Karidhya village at Suri in Birbhum, about 330 km from Kolkata, will cast her vote without her husband for the first time ever since her marriage 17 years ago. Rufta’s husband, Dildar Sheikh, was one of the many people who were killed during last year’s panchayat poll violence in the state. Dildar is now survived by his three minor daughters and wife. “Will any party be able to bring my husband back? Can anyone do something to lessen the burden I have on my shoulders?” said Rufta. However, despite the anguish, she will cast vote on Monday.

Clashes have been reported between TMC and BJP in Nanoor under Birbhum. The villagers have alleged that TMC workers are threatening them. Women in the area are out on streets with bamboo sticks. Police reinforcements are being sent to the spot.

Clashes have been reported between TMC and BJP in Nanoor under Birbhum. The villagers have alleged that TMC workers are threatening them. Women in the area are out on streets with bamboo sticks. Police reinforcements are being sent to the spot.

10:44 AM IST: BJP to meet EC over poll violence during polling in Bengal (Hindustan Times)

An EVM glitch has been reported from Maharashtra’s Patlipada. The machine was replaced after one hour. However, most of the voters went home after waiting for an hour.

Another EVM snag was reported in Mumbai’s Panvel where an EVM stopped working at Gujarati Shala pool booth. It was replaced in an hour.

Congress will move against the alleged breach of poll code by PM Modi and BJP chief Amit Shah.

The party is knocking the apex court’s door after no action by EC.

Congress MP Sushmita Dev has filed a plea asking the SC to instruct EC to announce a decision on the matter.

Congress has accused PM Modi and Amit Shah of using armed forces as well as hate speech in campaigning.

A 50-year-old woman poll staffer died after suffering a heart attack ahead of voting in Chhindwara Lok Sabha seat of Madhya Pradesh, an official said on Monday. Sunanda Kotekar, who was deployed at Lodhikheda polling booth in Saunsar area of Chhindwara, felt uneasy on Sunday night, Chief Electoral Officer V L Kantha Rao said. She died of the heart attack even before she could be provided any medical assistance, he added. The woman and other personnel of the polling team had reached the booth early on Sunday. PTI

10:19 AM IST: In a first, Naxal-affected region votes in Jharkhand

Polling is being conducted for the first time at booth number 249 in Jagodih area of Palamu constituency. It is a Naxal-affected area.

9:56 AM IST: Polling percentage till 9 am in phase 4 of Lok Sabha polls (Hindustan Times)

9:49 AM IST: EVM snatched away in Bengal (India Today)

An EVM has reportedly been snatched away from a polling station in West Bengal’s Dubrajpur.

9.59% votes polled in Uttar Pradesh till 9 am amid complaints of EVM malfunctioning in Kannauj and other places.

9:36 AM IST: Eco-friendly polling booths in Bihar are a visual treat (India Today)

There has been a report of violence in West Bengal as BJP MP candidate from Asansol Bul Supriyo’s car was vandalised outside the polling booth.

Complaints of EVM malfucntion in Mumbai as well

8:42 AM IST: All you need to know about Phase 4 elections (India Today)

72 Lok Sabha constituencies are voting in the 4th phase of Lok Sabha elections.

8:36 AM IST: Complaints of EVM malfunctioning in Bolpur (India Today)

West Bengal: Agitated over EVM malfunctioning, angry voters protest against polling officers in Booth No. 205 and 207 under Bolpur constituency.

8:19 AM IST: Priyanka Chopra comes out to vote along with mother Madhu Chopra (India Today)

Actor Rekha was among the early ones to exercise their voting rights as Mumbai goes to poll today. She cast her vote at a polling booth in Bandra in the fourth phase of Lok Sabha Elections.

Businessman Anil Ambani cast his vote at the polling booth at Cuffe parade in Mumbai.