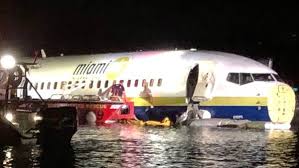 A Boeing 737 commercial jet with 136 people on board slid into the St John’s River near Jacksonville, Florida after landing on Friday, a spokesman for Naval Air Station Jacksonville said.

There were no reports of fatalities.

The flight arriving from Naval Station Guantanamo Bay went into the river at the end of the runway at about 9:40 p.m. local time, the air station said.

The mayor of Jacksonville said on Twitter that everyone on board the flight was “alive and accounted for” but that crews were working to control jet fuel on the water.

“The plane was not submerged. Every person is alive and accounted for,” the Jacksonville Sheriff’s Office said on Twitter.

The sheriff’s tweet was accompanied by two photographs showing the plane bearing the logo of Miami Air International resting in shallow water and fully intact.

Miami Air International is a charter airline operating a fleet of Boeing 737-800 aircraft. Representatives for the airline could not immediately be reached for comment by Reuters on Friday evening.

A Boeing spokesman said that the company was aware of the incident and was gathering information.