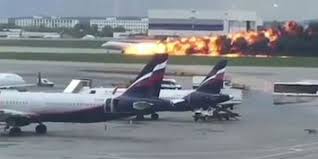 Forty-one people have died after a fire on board a Russian passenger plane forced the aircraft into an emergency landing at a Moscow airport, a Russian news agency has reported.

Officials said a criminal investigation had been launched into the incident, which saw an Aeroflot Sukhoi Superjet aircraft catch fire shortly after taking off from Sheremetyevo International Airport in the north of the capital.

Russian state TV showed footage of the plane with black smoke rising above its tail after it landed, and video posted on social media showed much of the rear engulfed by flame as it sped down the runway.

One clip showed a number of panicked people fleeing from the aircraft, a Sukhoi SSJ-100 regional jet, as an emergency vehicle approached.

Another broadcast by Russian news channel Rossiya-24 showed passengers leaping from the plane on to an inflatable slide from the front of the aircraft.

Aeroflot said the plane – which Russian Interfax news agency said had 73 passengers and five crew on board – was forced to turn back after taking off from Sheremetyevo, blaming “technical reasons”.

The airline – Russia’s flagship carrier – said emergency medical care was being provided to the injured, with at least seven people reported to have been hurt.

The Russian health ministry said two of the injured were in a “serious condition”.

It added that an investigation had been opened to establish the cause of the fire.

According to Interfax, the plane had tanks full of fuel when it made its landing just 20 minutes after taking off.

The plane was said to have hit the runway three times, causing fuel from the tanks to spill and flare, engulfing the back of the main body of the aircraft in flames.

The SSJ-100 is largely used in Russia as a replacement for outdated Soviet-era aircraft, but is also used by airlines in other countries, including Armenia and Mexico.

It has been involved in a fatal accident once before, in 2012, when a demonstration flight in Indonesia struck a mountain, killing all 45 aboard.