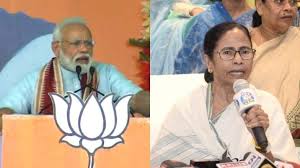 Prime Minister Narendra Modi has hit back at Mamata Banerjee’s slap of democracy jibe and said the slap will become a blessing for him.

Speaking at a rally West Bengal’s Purulia on Thursday, PM Modi hit back at the West Bengal chief minister who had recently said that whenever she sees him, she feels like giving him a tight slap of democracy.

“I was told that Didi has told you that she feels like slapping Modi. Mamata Didi, I call you Didi and your slap will become a blessing for me,” said Modi in Purulia where Mamata had made the remark on Tuesday.

At a public meeting in Purulia Mamata had said that Narendra Modi deserved the slap for accusing her party Trinmool Congress of using extortion money. She also likened the prime minister to Duryodhana, Dushayasana and Raavana.

On Thursday, Modi said, “But Didi had you shown the courage to slap those friends of yours, who looted the money of poor people through chit funds, you wouldn’t be so scared today.”

The Prime Minister then raked up the issue of Bangladeshi immigrants. He said, “I want to assure you that the infiltrators that Didi and Trinamool have made their cadre, will be identified. Those who trouble our daughters and the cultured Bengalis here, they will be identified.”