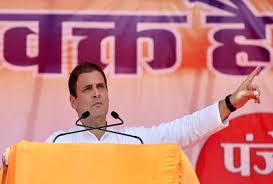 Congress chief Rahul Gandhi admitted he has been on now-decommissioned Indian Naval Ship Viraat but termed as “crazy” the idea that his family used the erstwhile aircraft carrier for a holiday. The Congress president was responding to a charge levelled by PM Narendra Modi. PM Modi, at a recent election rally in New Delhi, alleged that the Gandhi family used one of India’s premier warships for a “holiday” in the Lakshadweep archipelago.

Referring to pictures of a holiday taken by the Gandhi family in Lakshadweep in the 1980s, Rahul Gandhi said, “I’ve been on the Viraat. I’ve been with my father on it when he was the PM. Of course there are pictures. He had gone for an official visit … and I accompanied him.”

When asked about the allegation that the Gandhi family used INS Viraat, Rahul Gandhi said, “Holiday on the INS Viraat? That’s crazy. Why would anyone holiday on an aircraft carrier? It’s not a cruise ship!”

Rahul Gandhi was speaking to national daily Hindustan Times, days after PM Narendra Modi accused Rahul’s father Rajiv Gandhi of using INS Viraat for a family holiday when he was the prime minister in 1987.

“Have you ever heard that someone uses INS Viraat to enjoy holiday? It happened when Rajiv Gandhi was the PM of this country? INS Viraat, which was deployed on sea borders, was sent to facilitate a holiday for 10 days,” PM Modi said during a rally in New Delhi on Wednesday.

“Foreigners were allowed to enter the INS Viraat, was it not a compromise with national security? They put nation first and security of Indian citizens second,” Modi also alleged.

In the days since PM Modi’s allegations, civilian and defence officers with knowledge of the Gandhi family’s vacation have refuted the prime minister’s charges.

Wajahat Habibullah, who was the administrator of Lakshadweep at the time of the Gandhi family vacation, told India Today TV INS Viraat was indeed stationed in Lakshadweep, but for security reasons.

“INS Viraat was in the sea for the PM’s backup security. The Prime Minister needs backup security and in the middle of the ocean, there’s no other option other than warships,” Habibullah said.

Former Indian Navy chief L Ramdas, who was the then southern navy commander, refuted the claim that foreigners had boarded INS Viraat.

“Prime Minister Rajiv Gandhi and Mrs Sonia Gandhi were embarked on board INS Viraat off Trivandrum enroute Lakshadweep. The Prime Minister was at Trivandrum as chief guest for the National Games prize distribution,” Ramdas said. “There were no foreigners with them. I, as Flag officer commanding in Chief, Southern Naval Command, based in Cochin [now known as Kochi], also boarded INS Viraat.”