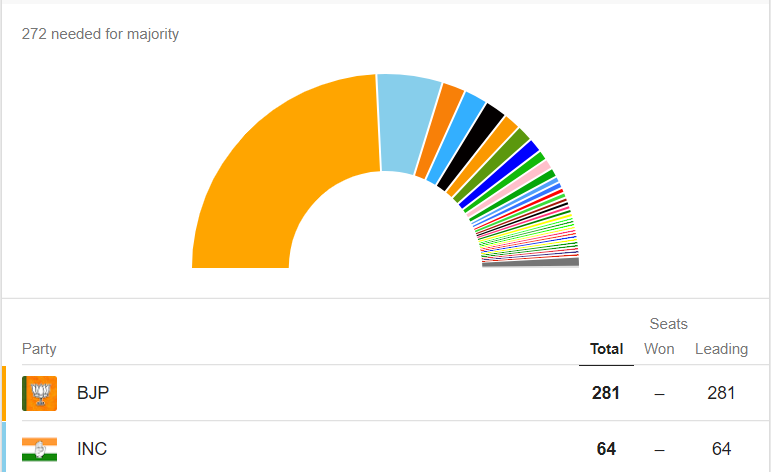 The much-anticipated day is finally here. The counting of votes for the 17th Lok Sabha elections has begun. While trends have started trickling in, a clear picture is expected to emerge only late afternoon.

Track all the LIVE updates on the Lok Sabha election results 2019 here:

10:13 AM IST: BJP’s Kailash Vijayvargiya tells opposition not to complain about poll results

“We had great players this time…” BJP general secretary Kailash Vijayvargiya tells NDTV when asked about initial results. He credited the party’s leads in West Bengal to the state’s voters preferring a democratic government. And he had a message for the opposition: Don’t complain about the result. Spokesperson Shahnawaz Hussain jumped in to offer his own analysis: “Poora desh Modi Modi kar rahi hai (the whole country is saying Modi, Modi)

BJP’s youngest Lok Sabha candidate Tejasvi Surya, who is contesing from Bangalore South, is leading by over 50,000 votes against Congress’ B K Hariprasad. Union Minister Sadananda Gowda is leading with a margin of close to 7,000 votes in Bangalore North. Former prime minister Devegowda is trailing in Tumkur by 5026 votes. And it is neck-and-neck in Mandya between Devegowda’s grandson Nikhil Kumaraswamy and Sumalatha Ambareesh. The margin at the moment is just 150 votes, with Sumalatha, who is contesting as an independent, in the lead.

Union Minister Maneka Gandhi is trailing BSP candidate by close to 7,000 votes in Sultanpur. The seat was previously represented by Maneka’s son Varun Gandhi, who switched to Pilibhit. In Tamil Nadu’s Sivaganga, former union minister P Chidambaram’s son Karti Chidambaram is leading with a margin of over 2,000 votes. In Nilgiris, former union minister A Raja of the DMK is leading by over 20,000 votes. Deputy chief minister’s son Raveendranath Kumar is leading with a wafer-thin majority of 834 votes.

The markets are as initial trends indicate that the Modi-led BJP is leading in seats across the country. The Sensex is up over 600 points, and the Nifty crossed 11,900 mark. Fund managers had earlier had said that the Modi government’s victory had largely been factored in by the markets after the exit poll results.

9:47 AM IST: BJP candidates open with massive leads in Delhi

In the initial rounds of counting, Prime Minister Narendra Modi is leading from Varanasi, a parliamentary seat he won in 2014. Samajwadi Party and Congress are second and third, respectively.

9:27 AM IST: Neck and neck battle between BJP and Congress

According to initial trends by NDTV, in Andhra Pradesh, YSR Congress is leading with 15 seats while TDP is catching up with 3 seats. In Odisha, the ruling BJD is leading with 4 seats.

9:21 AM IST: Election results 2019: How things are shaping up in Uttar Pradesh

In Gorakhpur, Ravi Kishan of the BJP is leading his closest rival Rambhual Nishad of the SP by over 4,000 votes. The BJP is trailing by 261 votes in Jhansi, which was previously represented by Union Minsiter Uma Bharti.

INLD chief Ajit Singh is trailing by over 7,000 votes in Muzaffarnagar to BJP’s incumbent Sanjeev Kumar Balyan. Varun Gandhi is leading by 53 votes in Pilibhit. UPA chairperson Sonia Gandhi is also leading with a waferthin majority of over 800 votes.

BJP is currently leading in 178 seats, while the Congress is ahead in 54 seats, as per the latest data from the Election Commission.

An hour after counting has begun, NDA is leading in over 200 seats at the moment followed by the UPA in 94, according to NDTV. The BJP is leading the charge in states such as Karnataka, Gujarat, Rajsthan, Uttar Pradesh, Haryana and Delhi, The Congress is putting up a fight in Maharashtra, Chhattisgarh, Bihar and Punjab.

In Uttar Pradesh, the BJP has opened a huge lead over the SP+BSP+RLD alliance and Congress. It is currently leading in 28 seats, according to NDTV. The gathbhandan is leading in four and the Congress two. The BJP also opened strongly in West Bengal, Karnataka and Gujarat. In Delhi, the national capital, the BJP is leading in all seven seats.

As per the latest data from C-Voter, the NDA is currently leading in 18 seats while UPA in 13. The postal ballots are being counted first, followed by the electronic voting machines.

8:17 AM IST: BJP races ahead with leads in Gujarat and Karnataka

It is just 15 minutes since counting has begun and the BJP has already cross the 50 mark, a bulk of those leads from Gujarat and Karantaka. It must be noted that these are just leads and counting of EVMs is yet to begin. The Congress is trailing with just leads in 11 seats, according to NDTV.

8:12 AM IST: Initial trends from Karnataka show BJP in lead

Early trends, according to news channel NDTV, the BJP is leading in 20 Lok Sabha seats and the Congress in seven seats. Most of the leads have come in from Karnataka where the saffron party is leading in 13 against the four seats of the JD(S)-Congress coalition.

8:05 AM IST: Counting of votes begins

Counting of votes begins for 542 Lok Sabha seats. Around 18 lakh postal ballots will be counted before moving to EVMs. Irrespective of all the postal ballots being accounted for, counting of EVMs will begin within the next 30 minutes.

Despite slipping to 44 Lok Sabha seats in 2014, a historic low, the Congress is confident this time from the fact its net votes did not erode massively in comparison to the BJP’s stupendous jump. The Congress had polled over 10.6 crore votes as compared to 11.9 crore in 2009.

The Opposition might have been split over combining forces ahead of the polls, but they are unanimous about one thing: EVMs are not reliable. Can EVMs be tampered with to influence results? Are they secure? We explain all yours questions over the EVMs here.

7:16 AM IST: With laddoo cake and lotus-shapred barfi, BJP hopes for sweet outcome

The BJP’s Delhi unit has ordered 10 “laddoo cakes” in preparation for the celebrations that would follow as the trends begin to trickle in. It is essentiatially a sponge cake loaded with cream and laddoos arranged on top. An order was placed with Bengali Pastry Shop for a 8 kg cake and rest weighing 5 kg each. The owner of the pastry shop in Bengali maket, Umesh Aggarwal, said: ““The cake is priced at Rs 900-Rs 1,000 per kg.” Meanwhile, BJP leader Praveen Shankar Kapoor, who was looking after the campaign of East Delhi candidate Gautam Gambhir, said he has ordered 50 kg of lotus-shaped barfi from a Chandni Chowk shop.

6:54 AM IST: The BJP is banking on West Bengal and Odisha

The BJP is banking on making inroads in states such as West Bengal and Odisha to make up loses, if any, in the Hindi heartland where it had peaked in the previous Lok Sabha elections in 2014. Besides these states, the BJP also hopes to do well in Karnataka and Rajasthan, where its main rival the Congress came to power in the state assemblies

The Opposition’s game plan appears to be hinging on the hope that the NDA would fall well short of the halfway mark of 272. Sources told The Indian Express that the Congress has drafted three letters addressed to President Ram Nath Kovind to outmanuvere the BJP in case of a fractured mandate

6:39 AM IST: Counting to begin with tally of postal ballots

Counting will begin with tally of postal ballots. It will be followed by counting of EVMs which are expected to begin after 30 minutes, even if the counting of postal ballots votes have not been completed by then. Here’s a Express Explained on what will happen through the day

6:24 AM IST: Good morning! Welcome to the election results live blog where we will get you LIVE updates on who will form the next government. Counting of votes will begin at 8 am this morning and we should expect the first trends by about 11 am. Stay tuned!

For the first time in general elections, the EC will tally vote count on Electronic Voting Machines with voter verified paper audit trail (VVPAT) slips in five polling stations in each assembly segment of a parliamentary constituency.

It will effectively mean that out of nearly 10.3 lakh polling stations, the EVM-VVPAT matching will take place in 20,600 such stations. In case of a mismatch, the results based on paper slip count will be considered as final. As per procedure, postal ballots would be the first to be counted.

Ahead of counting of votes, the security of electronic voting machines had become the centre of controversy. As many as 22 opposition parties had approached the Election Commission over reports of supposedly suspiciuous EVM movements, while the poll watchdog had dismissed allegations of EVMs being switched.

On Wednesday, the EC rejected the opposition parties’ demand and learnt to have stuck to its plan of counting the paper trail machines slips at the end of counts and not in the beginning as demanded by opposition parties.