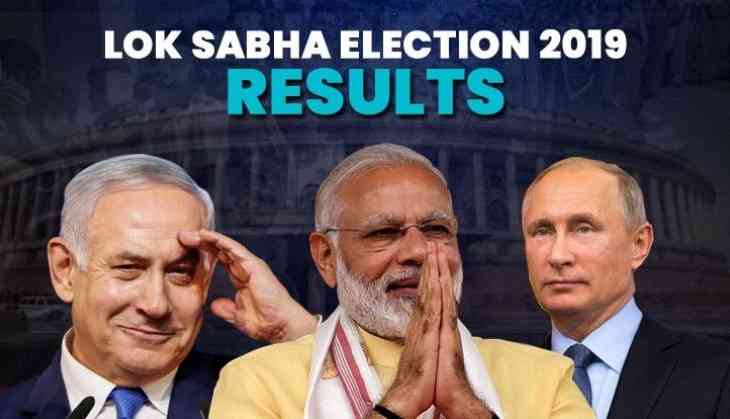 Congratulatory messages from Bangladesh, Russian, Chinese and French leaders among others poured in for Prime Minister Narendra Modi as he led BJP to a resounding win in the Lok Sabha elections, becoming the first non-Congress PM to return to power after a full five-year term.

Expressing his gratitude for their compliments and good wishes, PM Modi said the general elections embodied the strength of Indian democracy, which is the world s largest. He thanked the global leaders for their cooperation in developing mutually beneficial bilateral relations and multilateral cooperation and expressed his desire to continue to work further with them in fostering even stronger ties.

Here is how the world leaders reacted to PM Modi’s win:

Russian President Vladimir Putin: “I am convinced that, as the Prime Minister of India, you will further strengthen the centuries-old friendship between our peoples and the all-round development of a particularly privileged strategic partnership between Russia and India.”

Pakistan Prime Minister Imran Khan: “I congratulate Prime Minister Modi on the electoral victory of BJP and allies. Look forward to working with him for peace, progress and prosperity in South Asia.”

Chinese President Xi Jinping: “I attach great importance to the development of China-India relations and would like to work with you to guide the development directions of the bilateral relations, enhance mutual political trust, expand pragmatic cooperation and promote the closer developmental partnership between the two countries to a new height.”

Bangladesh Prime Minister Sheikh Hasina: “This emphatic verdict is a reflection of the trust and confidence reposed on you (Modi) by the people of India.”

Israeli Prime Minister Benjamin Netanyahu: “The election results are a re-approval of your leadership and the way you lead the world’s greatest democracy. Together we will continue to strengthen the great friendship between us and India and Israel and lead it to new heights.”

Abu Dhabi Crown Prince Mohammed bin Zayed: “I was pleased to talk to my dear friend Narendra Modi, India’s PM, over the phone to congratulate him on his party’s election win. We look forward to working together to deepen our strong bilateral ties. The UAE wishes India & its friendly people more development & prosperity.”

US President Donald Trump: “Congratulations to Prime Minister @NarendraModi and his BJP party on their BIG election victory! Great things are in store for the US-India partnership with the return of PM Modi at the helm. I look forward to continuing our important work together!”