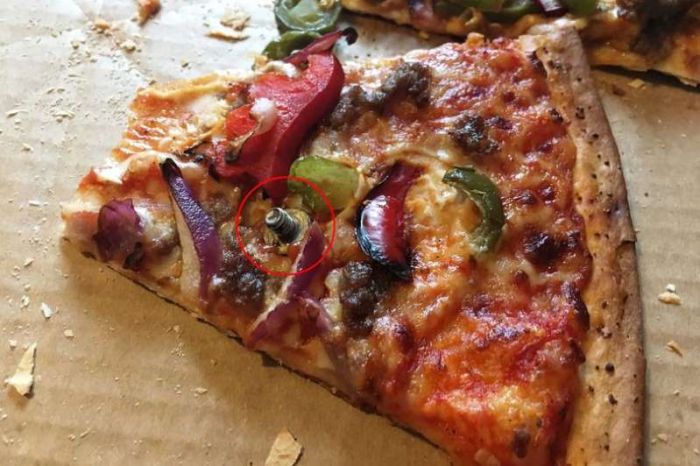 A woman says she was shocked to find a metal screw in her Domino’s pizza , right in between a piece of ground beef and a green pepper.

Rachel Carr said she had a narrow escape as she was about to put the slice in her mouth when she noticed something silver and shiny among the toppings.

The 28-year-old, from Uttoxeter in Staffordshire, said she was “horrified”.

Rachel was having a night off her diet when she ordered a pizza from the popular chain’s Uttoxeter branch on Friday night, the Burton Mail reports.

Rachel, a teacher, said: “I was looking forward to having a break from my diet and a bit of a cheat night with a few slices of pizza.

“My boyfriend and I ordered a hot and spicy and a tandoori hot pizza from Domino’s in Uttoxeter.

“The pizzas were lovely, but about three-quarters of the way through the hot and spicy, I picked up a slice and was about to put it in my mouth when I noticed something silver and shiny in among the toppings.

“I was horrified when I saw a medium-sized screw between a piece of ground beef and a green pepper. I was shocked and wondered how on earth it could have got in there.

“At that point, I stopped eating the pizza as I was concerned there might be more metal in there.

“It could have been very dangerous. Had I bit into the screw, it could have resulted in some pretty bad dental damage.”

She said if she’d have swallowed it, she has no idea what might have happened.

She said she feels there should be better quality control.

Rachel added: “On the Domino’s app it says there’s a ‘quality check’ phase before delivery. I’m not sure there was a particularly thorough check on this occasion.”

She said: “I was put on to the manager, who, at first, assured me they didn’t use screws in the kitchen. However, he then asked if the screw had “star head” on it, which it did.

“I was offered two new pizzas, but asked for a refund instead. The manager apologised and asked me to return the pizza in exchange for the cash.”

Minutes later, a Domino’s delivery driver knocked on the door of Miss Carr’s Birdland home to hand over the dough.

According to Rachel, he was “very apologetic and polite”.

She said: “I then messaged Domino’s on Facebook and got a prompt response saying a member of their care team would be in touch. They asked me to keep hold of the slice. I don’t think they knew I’d already been in touch with the local branch and handed it back, in fairness.”

A Domino’s spokesman said: “We were concerned to learn about the small screw in our customer’s pizza and have been in touch with the store to investigate further.

“We’re pleased the store offered a prompt refund but would still like to offer the customer our sincere apologies and appreciation for giving us the opportunity to address this issue.”