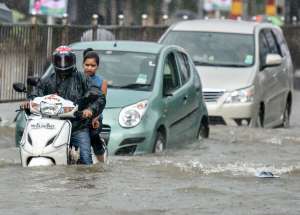 As many as 16 people were killed overnight due to rain-related accidents in Mumbai and Thane as the city witnessed massive rainfall in the 48 hours.

As a precautionary measure, the Maharashtra government has declared a public holiday on July 2 (Tuesday).

In a late night order, the municipal commissioner announced that all the schools and colleges will remain shut on Tuesday.

The city remained on edge as it received the highest rainfall in a decade, affecting long-distance trains and flights.

In the wake of extremely heavy rainfall in Mumbai, 12 people were dead while 13 were injured as a wall collapsed on hutments in Pimpripada area of Malad East on early Tuesday morning.

While the Injured were rushed to nearby hospitals, sources said many were feared to be trapped under the debris.