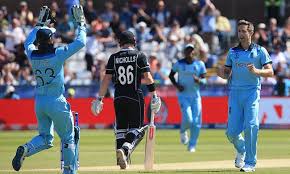 Hosts England joined India and Australia and have almost dragged New Zealand with them to the semi-finals of the ICC Cricket World Cup 2019 with a comprehensive 119-run win over Kane Williamson in their final group-stage match at Riverside Ground in Chester-le-Street on Wednesday.

England were in danger of getting knocked out before reaching the knockoustages yet another time in the quadrennial touranment when they lost to Sri Lanka and Australia on the trot. However, Eoin Morgan’s men have kept their composure and stormed back with wins over India and New Zealand in their last two group-stage matches.

With New Zealand’s 119-run defeat, Pakistan are all but out of the semi-final race. They face an improbable task on Friday in their final group-game against Bangladesh as they need to win by a margin of well over 270 if they bat first. If they bowl against Bangladesh at Lord’s, they have no chance of keeping their outside chances alive.

England’s batting firepower helped them overcome a tough Indian challenge on Sunday in Birmingham and it was once again the case against New Zealand as Jonny Baristow and Jason Roy stitched their 2nd straight hundred-run stand of World Cup 2019.

After winning the toss in Chester-le-Street, Roy and Baristow went after the New Zealand new-ball attack with a lot of success. Left-arm spinner Mitchell Santner nearly had Roy walking back to the pavillion with an arm-ball in the first ball of Match 41 but Roy survived the close shave and went on to punish the New Zealand pacers.

Veteran Tim Southee conceded aplenty in his first World Cup 2019 spell and the likes of Trent Boult and Matt Henry went wicketkless in their first spells as Baristow and Roy added 123 runs for the opening stand. Roy was dimsissed for 60 but Bairstow went on to become the first English cricketer to hit back-to-back World Cup hundreds.

New Zeland though pulled things back with a fine bowling performance in the end overs as James Neesham, Henry and Boult struck late to derail the England innings. England managed just 63 runs in the last 10 overs as they were restricted to 304.

However, New Zealand’s chase got off to a horror start when they lost Henry Nicholls for naught in the first over. Martin Guptill suffered another failure as he was dimissed for 8, leaving New Zealand reeling at 14 for 2.

Seasoned campaigners Kane Williamson and Ross Taylor made a bid to rebuild the innings but England ran the two batsmen out in quick succession with some smart work on the field.

While it looked game over for New Zealand after the wickets of Taylor and Williamsom, Tom Latham and James Neesham helped New Zealand stay aflot with a 50-run stand. However, Mark Wood came back to haunt the Black Caps by removing Neesham for 19.

Latham went on to complete a half-century before he was caught behind off a Liam Plunkett bouncer in the 39th over.

England came up with a collective effort with the ball as Mark Wood picked up 3 wickets while the likes of Jofra Archer, Liam Plunkett, Chirs Woakes and Ben Stokes picked up a wicket each to dent New Zealand’s chase at regular intervals.