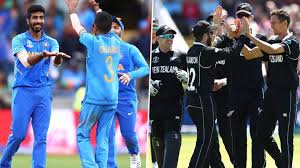 Rain has come back to haunt cricket fans in the World Cup 2019 and that too in the first semi-final itself between India and New Zealand in Manchester. The match will resume on the reserve day.

Play had to be stopped after 46.1 overs in the first innings when New Zealand had reached 211 for 5 with Ross Taylor (67*) and Tom Latham (3*) on strike. Bhuvneshwar Kumar, Jasprit Bumrah, Hardik Pandya, Ravindra Jadeja and Yuzvendra Chahal had picked up a wicket each till that point for India.

For the match to be completed, India are required to bat for at least 20 overs. If no play is possible on the reserve day also then India will qualify for the final due as they had finished on top of the points table in the league phasea, ahead of fourth-placed New Zealand.

“In the event of poor weather for example, steps will be taken to be able to finish the match that day e.g. reducing the number of overs down to the minimum of 20 overs per team needed to achieve a result, or by extending the match by up to 120 min.

“Your match ticket is valid for both the originally planned date of the match and will also be valid on the Reserve Day if required. Please hold onto your ticket for the Reserve Day to gain entry to the ground.

“If you are unable to attend the Reserve Day, please note that you cannot sell your ticket to other fans due to the limited turnaround time,” the ICC said in a statement for all ticket holders of this semi-final.

Incidentally, India’s league match against New Zealand was washed out without a ball being bowled in Nottingham. India reached the semi-finals after winning 7 of their 8 completed matches.