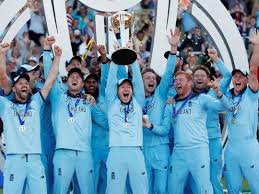 The prize money offered to the winner’s of the Cricket World Cup 2019 is the highest ever offered in an international cricket tournament.

England cricket team will get richer by USD 4 million for winning the Cricket World Cup 2019 after they beat New Zealand in a humdinger of a final played at the Lord’s cricket ground in London on Sunday.

The scores were tied at 241 each after 50 overs which meant the match went into the Super Over. But even the extra 12 deliveries couldn’t separate the two teams as both England and New Zealand managed 15 runs each. But hosts England were crowned world champions as they had hit more boundaries in the match and in the Super Over.

The total prize pot, which sits at USD 10 million, will see the runners-up New Zealand get USD 2 million. Losing semi-finalists Australia and India will get USD 800,000 each.

The 10 teams in the tournament played against each other in a single-league format, with the top four sides – India, Australia, England and New Zealand – after 45 matches qualifying for the two semi-finals.

For winning each league match, teams will get USD 40,000 each. That means the India and Australia will take home a total of USD 1.80 million each from their campaigns

Officials adjudged Kane Williamson as the Player of the Tournament for scoring 578 runs in the 10 matches. The New Zealand captain got a trophy from Sachin Tendulkar and a watch for finishing as the best player in the 46-day-long tournament.

Ben Stokes was adjudged Player of the Match and he will walk away with a trophy and a watch.

England players had decided even before the summit clash that they would split the prize money if they end up winning their maiden World Cup title.

They will now split the money pro rata among the squad and they will receive a bonus on top of their England deals as well, thought to be worth up to 100,000 pounds each depending on which level of contract a player is on.

England head coach Trevor Bayliss will earn a separate payment negotiated when he was appointed four years ago to spearhead the World Cup assault.