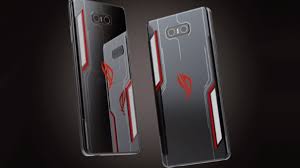 Gaming phones are all the rage these days and Asus, which popularised the idea of a gaming phone on a global scale with last year’s ROG Phone, has unveiled its successor today.

Let’s look at some of the headlining features of the ROG Phone 2 – this is the first phone in the world to use the Snapdragon 855 Plus chipset. The Snapdragon 855 Plus was unveiled a few days ago and according to Qualcomm, it offers 15 per cent improvement in graphics performance and four per cent improvement in CPU performance. You can get it with up to 12GB RAM and 512GB storage. However, Asus has also added a few other bits that could help the ROG Phone 2’s cause.

First is the display which now measures 6.59-inch and gets a Full HD+ AMOLED panel with a refresh rate of 120Hz. However, the touch sampling rate measures 240Hz and 1ms response, which means it is faster than the iPhone XS Max. Therefore, gamers will have a smoother experience. The screen has bezels on top and bottom but Asus has provided a stereo speaker setup that Asus claims its 2.5 times louder and supports DTS:X Ultra audio.

Similar to the recently launched Asus 6z, the ROG Phone 2 comes with a stock Android interface but for those who want more custom options, they can opt for the ROG UI that offers a more gamer-focused experience. The phone comes with Asus’ bespoke cooling system with an air vent that helps keeps the temperatures under control. The Air Trigger and the improved vibration motors make it this one as well but they are now claimed to be better.

As for the cameras, the ROG Phone 2 gets a 24-megapixel camera up front for streaming videos. It is aided by four microphones to ensure clear voice recording. The rear cameras are borrowed from the Asus 6z – there’s a 48-megapixel primary camera and a 13-megapixel wide-angle camera. And no, this camera doesn’t flip to the front.

Battery is where Asus always nails it and with the ROG Phone 2, they have raised the bar quite high. This phone comes with a mega 6000mAh battery (yes, you get that sort of battery in tablets) and Asus promises that the phone can last up to seven hours on PUBG sessions alone. And for filling up the battery, there’s a superfast 30W charging system.

Given that the ROG Phone came to India late last year, Asus could be bringing this phone to India within a few months. The gaming smartphone segment is filling up in India with a compelling option at very affordable prices and it remains to be seen how Asus prices it here.