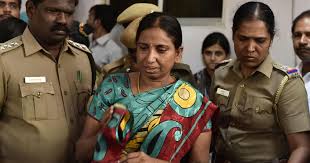 Rajiv Gandhi assassination convict, Nalini Sriharan, who has been serving a life term for the past 28 years has been granted the first ever prolonged parole by the Madras High Court.
Nalini has been released on a 30-day parole from the Vellore jail. Nalini had sought parole for 30 days to arrange for her daughter’s wedding. Nalini had sought parole for 6 months but has been granted 30 days.

On July 5, the high court had granted one month parole to Nalini after she argued in person her plea seeking the relief to make arrangements for her daughter’s wedding.

The court has specifically ordered Nalini to not meet or speak to any media in these 30 days. The court has also issued a set of guidelines to Nalini for the parole period.

This is the first time Nalini is out on parole in 28 years of imprisonment. She was granted a 12-hour parole in 2016 to attend the funeral of her father.

This is the first time she has been granted parole for a longer time.

Nalini was brought out of the Vellore jail on Thursday morning and was received by a relative outside the prison.

Nalini will be making arrangements for the wedding of her daughter. Her daughter was born in the Vellore jail itself and was raised in the UK. She is a medical professional.

Last week the Madras High Court had dismissed a petition filed by Nalini Sriharan seeking a direction to the Tamil Nadu Governor for her premature release.

On September 9, 2018 the Tamil Nadu council of ministers adviced the Governor to release Nalini and six others involved in the assassination of former Prime Minister Rajiv Gandhi.

Nalini had moved the High Court, seeking a direction to the Governor to countersign the advice of the council of ministers.

The seven are serving life sentence for their role in the assassination of the former prime minister by an LTTE suicide bomber on May 21, 1991 in nearby Sriperumpudur.