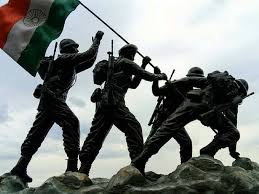 India will mark Kargil Vijay Diwas on Friday to commemorate its victory over Pakistan in the conflict that took place in the mountains above Kargil on the Line of Control in Jammu and Kashmir. It has been 20 years since the Indian Army, with the help of the Indian Air Force (IAF), wrested back the glaciated heights of Kargil, in the Ladakh sector, from the Pakistan army.
The Kargil war, which lasted a little over two months, ended on July 26, 1999, and led to 527 deaths on India’s side.

Here are some facts about the Kargil War:

* The Kargil War took place between May and July of 1999 in Jammu and Kashmir’s Kargil district and was fought under the temperature of minus 10 degree Celsius.

* It began after Indian forces detected infiltrations by Pakistani troops and terrorists into Indian territory. The Pakistani side had a strategic advantage during the start of the conflict as they positioned themselves in key locations and could fire at advancing Indian troops.

* The Indian Army was able to ascertain the points of incursion based on information from local shepherds and launched Operation Vijay.

* IAF’s launched its air operations under Operation Safed Sagar in support of the army on May 26. Indian MiG-21, MiG-27 and Mirage-2000 fighters fired rockets and missiles throughout the Kargil War at the “fortified enemy positions” from their side of LoC.

* IAF had planned to bomb targets in Pakistan during the Kargil War. But the then NDA government led by Atal Bihari Vajpayee instructed the then IAF chief Air Chief Marshal AY Tipnis that his fighter jets must not cross LoC under any circumstances.

* IAF also wanted to cross the LoC slightly during the Kargil War but this request was also rejected by the government.

* Pakistan shot down two Indian fighter jets while another crashed during the operation.

* Indian Navy also launched Operation Talwar to blockade Pakistani ports, especially the one in Karachi, during the Kargil war to stop the supply of oil and fuel. It western and eastern fleets patrolled the Arabian Sea and threatened to cut Pakistan’s trade routes.

* Pakistan asked the US to intervene but then American president Bill Clinton declined its request, saying Islamabad must withdraw its troops from the Line of Control.

* Indian armed forces attacked the rest of the outposts as Pakistani troops withdrew and captured the last of them by July 26.

* The official death toll on the Indian side was 527 and that on the Pakistani side was between 357 and 453.

* Pakistan had initially denied it had any role in the conflict and said that India was facing off with “Kashmiri freedom fighters.” It, however, awarded its soldiers medals for the conflict later.

* After the Kargil War, India increased its defence spending in the budget.