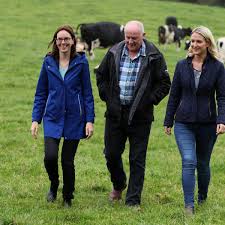 The French government has warned Boris Johnson against playing games with the Irish border after the new British prime minister demanded the ditching of the backstop.

Amélie de Montchalin, France’s minister for European affairs, said both sides should avoid “games, gestures and provocations” with just three months to go before the UK is due to leave the EU.

Speaking alongside her Irish counterpart, Helen McEntee, during a visit to the Irish border, De Montchalin said the French president, Emmanuel Macron, would hold talks with Johnson in France in the coming weeks.

She said there was “solidarity” with Ireland and reiterated that the withdrawal agreement was “the best we have” and would not be renegotiated.

De Montchalin said: “As you know, France has a simple approach to a very complex issue. It is a UK decision and it has to be solved by UK decisions again. It is not in Brussels, it is not in Paris, it is not in Dublin that we can decide for the British people how they want to go forward with the process they opened with the referendum.

“If the UK wants to leave, and it wants to leave in an orderly manner, the best we have is the negotiated agreement, which took years and years and detailed work to reach what we found is in the best in of the two parties.

She continued: “What is still to negotiate is the future relationship. We have to create a working relationship and not get into games, gestures and provocations.”

Johnson said earlier this week that he would not accept a deal that contains the “undemocratic” Irish backstop, the arrangement that would keep Northern Ireland under single market regulations and the whole of the UK in a shared customs territory with the EU until an alternative solution can be found to avoid a hard border on the island of Ireland.

The prime minister has ordered Michael Gove to lead efforts to ramp up preparations for a no-deal exit this autumn if Brussels refuses to yield on the issue.

But De Montchalin said said adding red lines such as the “do or die” exit date of 31 October “only created tensions in diplomacy”.

There is a growing belief in Brussels that Johnson has no intention of negotiating with the EU, but is instead driving forward with a no-deal exit with the understanding that parliament will block him and it will be necessary to call a general election.

Earlier in the day, one of the architects of the 1998 Good Friday agreement, the former Irish prime minister Bertie Ahern, expressed his concern about the danger of an accidental no-deal exit with potentially grave repercussions for peace.

He said: “I think we should all avoid trying to come up with simplistic solutions that this can all be done just by waving a hand or the stroke of a pen.

“It is complex, it is difficult, it is new, and I think forcing a deadline into that is not bright, and I put it no stronger than that … I just don’t see how such a tight timescale – [it’s] nothing to do with the determination, or skill, or ability, or anything – just to agree a whole new agreement, it’s just very hard to see how that can be done by Halloween.”

On Thursday, Johnson clashed with Jean-Claude Juncker, the outgoing European commission president, after demanding a renegotiation of the withdrawal agreement. The EU’s chief negotiator, Michel Barnier, also warned that the calls from Downing Street were “unacceptable”.