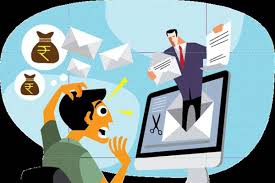 In case you are doing this while e-filing of Income Tax Return 2019-20, remember that this unethical means of tax evasion is a punishable offense. Moreover, with recent legal developments, technological advancements and data mining, the Income Tax Department is proactively keeping a check on such malpractices and issuing notices to the suspected tax evaders. The Assessing Officer has the authority to demand proofs of claimed deduction and upon failure to submit the required documents, the taxmen will disallow the claimed exemption. Moreover, such persons will require to pay additional taxes along with interests and penalties.

As per the Income Tax Act, 1961 the House Rent Allowance (HRA) provided by the employers are not taxable up to a specified limit depending on basic salary, HRA and actual rent paid. As a result this leads to less out-go of the tax. However, in order to reduce the tax outgo, fraudulent activities such as submission of the fake rent receipts have been extremely prevalent to claim HRA exemptions despite having one?s own residence in the same city.

The Income Tax Department has however taken stringent measures in order to combat the menace with the introduction of new ITR forms where taxpayers can give specific details of the allowances by mentioning it on the drop down column and the amended Form 16 which have been technically designed to keep a track on the fraudulent activities such as mismatch in the data with the help of new electronic computer processing methodology.

Under the new system, allowances (like HRA, LTA etc.) are required to be mentioned separately in Form 16 in order to maintain transparency in the system. In this regard, submission of supporting documents are extremely important to reveal the money trail of the rent, which has been paid.

The I-T Department at the time of scrutiny of the returns might ask the employer to furnish the supporting evidence for tax deducted at source u/s 192 of the Income Tax Act and check the authenticity of documents submitted.

For instance, in case the rent paid is more than Rs 1 lakh in a financial year, landlord?s PAN should be submitted. However, many people just provide rent receipt to employer without giving additional documents and information about landlord. Such fake claims can be part of scrutiny and if it is not substantiated with agreement and payment proof, the assessee would be held guilty of tax evasion.

According to the Income Tax Appellate Tribunal (ITAT), such fictitious claims can be rejected under the doctrine of res gestae. In that case, the assessee will have to produce any evidence that arises in the normal course of hiring of premises, such as leave and license agreement, letter to society intimating about his/her tenancy, rent payment through bank, cash payments backed with known sources, electricity bill payments through cheque, water bill payments through cheque, some correspondence coming during that period of tenancy to prove that transaction of hiring of premises was genuine and was happening during the said period.

Therefore, if an individual deliberately submits fake bills to misreport the income, it may attract penalty of 200 per cent. Additionally, an assessee is liable to pay an interest under sections 234A, 234B and 234C of the I-T Act.

At present, there is no law in India that prevents taxpayer from staying at parents or relatives house on rent, but production of proper documents corroborating the claimed exemption is indispensable.

So, it is advisable that one should try to contemplate other legal and ethical ways for tax planning and realise the importance of genuine tax submission, as it leads to the growth of the country.