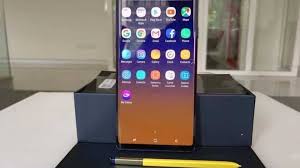 Samsung is gearing up for its next big product- Galaxy Note 10. Scheduled to launch on August 7, Samsung is expected to make some bold changes to its popular phablet series.

The company is expected to launch as many as three variants, dubbed as Galaxy Note 10 Lite, Note 10 and Note 10 Pro. Some of the top features expected from Samsung’s next flagship series are triple-rear cameras, bigger battery and 5G support.

Samsung had long resisted the notch trend before it introduced its own set of display cut-outs under Infinity series. This year Samsung launched a bunch of budget and mid-range phones with Infinity cut-outs. For its premium Galaxy S10-series, Samsung introduced a punch-hole camera mechanism.

The sensor features real-time HDR of up to 100-decibles for richer colours. The sensor was expected to launch Galaxy Note 10 but some leaksters claim otherwise.

All three variants of Galaxy Note 10 are rumoured to come with at least three rear cameras. According to reports, the series will feature 12-megapixel wide-angle lens, 12-megapixel telephoto lens, and 16-megapixel ultra wide-angle lens. The Note 10 Pro with 5G model is expected to have at least four cameras sensors with 3D ToF as an additional sensor.

Samsung’s next smartphone series will reportedly launch with Qualcomm Snapdragon 855 or 855+ chip. For select markets, Samsung may introduce an upgraded version of Exynos 9820 processor.

The battery capacity could be increased to 4,500mAh from Note 9’s 4,000. Samsung will bundle a 45W fast charging in the premium model of Note 10. UFS 3.0 storage could also make its way to Note 10 series with storage options ranging between 256GB, 512GB and 1TB.

Samsung is also expected to remove 3.5mm headphone jack on its next flagship phone.

Galaxy Note is one of the few smartphones in the world to retain the stylus support. Last year Samsung added a bunch of new features including Bluetooth support to its S Pen. According to reports, Samsung Galaxy Note 10’s S Pen could bring gesture control.