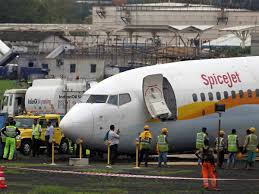 Aviation regulator DGCA on Monday suspended flying licences of two SpiceJet pilots for unstabilised landing approach that led to their aircraft overshooting runway after landing at Mumbai airport this month, according to a senior official.

The accident, involving a Boeing 737 plane coming from Jaipur, happened on July 1. It had also led to closure of Mumbai airport’s main runway for more than three days before the aircraft was removed.

The official told PTI that the licences of the two pilots — Ajinkya Hanchate and Tushar Dasgupta — have been suspended for one year and they also have to undergo corrective training.

Preliminary probe by the Directorate General of Civil Aviation (DGCA) showed that final approach was unstabilised and the plane touched down with high speed at around 1,600 metres from the runway threshold, resulting in runway excursion. The two pilots failed to exercise due caution and did not take corrective measures, the official added.

As per the regulator, the plane floated for longer time and landed after consuming half the runway 27.

After one-year suspension, Dasgupta has to undergo corrective training. He would fly as first officer for six months or for 300 hours whichever is earlier and his licence would be restored after assessment, the official said.