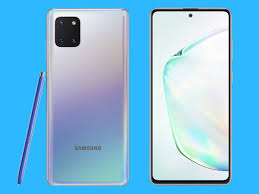 Ahead of the official launch, Samsung has hinted at some new features through its official teasers. Rumours and leaks are also in full swing leaving very little to our imaginations. Let’s take a look at what we know about the latest flagship Samsung smartphone.

Stylus has remained the marquee feature of Samsung’s Galaxy Note 10. Called S Pen, the stylus has evolved over the years with smarter form factor and features. S Pen, however, saw a big upgrade last year with the addition of Bluetooth, making it a virtual remote control for Note 9. According to reports, Galaxy Note 10’s S Pen will bring motion gestures and even the ability to zoom in and out in photos or files.

Samsung Galaxy Note 10 series will be upgraded to a triple rear camera setup. The phone is expected to feature 12-megapixel primary lens coupled with 16-megapixel ultra-wide angle lens and 12-megapixel telephoto lens with up to 2x optical zoon. The current Galaxy Note 9 has dual 12-megapixel rear cameras with usual features such as OIS, auto focus and dual-aperture.