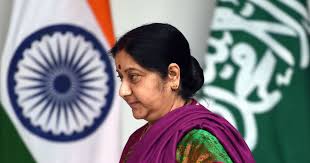 Sushma Swaraj thanked Prime Minister Narendra Modi on the abrogation of Section 370 in her last tweet hours before she passed away on late Tuesday evening.

Swaraj had posted a few other tweets on Monday too, congratulating Home Minister Amit Shah and the parliamenterians on the passage of the Jammu and Kashmir Reorganisation Bill in the Rajya Sabha.

Her most recent tweets include a congratulatory message to ISRO scientists on the successful launch of Chandrayaan 2.

“I salute @Isro scientists for making India a space super power by successfully launching #Chandrayaan2. I wish the mission a grand success,” she wrote.

In another tweet, Swaraj shared a picture of Kulbhushan Jadav’s family paying a visit to her. Jadhav is a former Indian Navy officer who is sentenced to death in Pakistan on espionage charges. The International Court of Justice had recently urged Pakistan to review its court decision and granted India consular access.

In another tweet, on July 20, Swaraj had expressed grief on the demise of Congress leader and former Delhi Chief Minister Sheila Dikshit.

“I am sorry to know about the sudden demise of Sheila Dixit ji. We were opponents in politics but friends in personal life. She was a fine human being. #SheilaDixit,” she wrote.

Among mostly tweets congratulating people and expressing condolences, the tweet that stands out is Swaraj’s sharp criticism of Samajwadi Party MP Azam Khan over his sexist remarks at Rama Devi, who was presiding over the proceedings during a debate on Triple Talaq in Lok Sabha.

“Azam Khan is known for making such statements which prove that he suffers from mental perversion. The statement that he made while addressing a lady Chairperson crossed all limits of decency. He deserves a stringent punishment to preserve the dignity and decorum of the House,” Swaraj wrote.

Swaraj had also posted a tweet on India’s defeat against New Zealand in the Cricket World Cup semi-final.