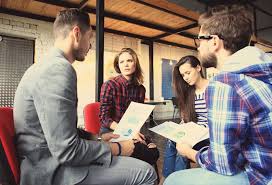 Hemant Rachh, a Bengaluru-based product expert in SAP Labs India, and his colleague came up with an idea in 2017 of an artificial intelligence (AI)-powered software that could convert all leads an organization received into sales. Within a few months, two more colleagues joined in to build the idea. Convinced of it as a product, the four-member team decided to pitch it at the annual SAP Labs India programme, InnVent, short for Innovation and Venture Challenge. Though the intrapreneurship programme doesn’t offer any financial support, it encourages employees to look beyond their regular work and think innovatively. “We won the challenge, received an external validation and confidence to take the idea forward,” says Rachh.

Developing the idea was tough since Rachh and team had full-time job commitments while taking care of what was fast becoming a full-fledged startup. “A startup requires a lot of interaction with potential customers to reach and validate the early stages of the product or market fit,” he says. They even thought of quitting the company and doing the startup work full-time, but what stopped them was SAP Labs India’s startup-like work culture that supported innovation and provided mentorship, in addition to its intrapreneurship programme. “The programme is exactly the same as going to a venture capital firm for funding your startup idea and we could do it while we had a corporate job,” says Rachh.

Late last year, Rachh and team applied to get into SAP.iO, a global intrapreneurship accelerator run by SAP and based in San Francisco, and became one of the two teams out of 500 within SAP to get funded. In February, they moved to San Francisco to focus full-time on their startup, now called Inversation by SAP.

For Dilipkumar Khandelwal, managing director of SAP Labs India, losing four good employees, Rachh, Amit Kumar Singh, Mohit Kanoria and Sharath Kumar Raju, to what he calls an “entrepreneurial sabbatical” of two years, to run a startup in the US while they are being paid a salary, is a win-win situation. Not only do intrapreneurial programmes increase productivity and create a healthy competitive environment, they also enable companies to adapt to changing environments, innovate and solve customer problems. As a leader, believes Khandelwal, it’s his responsibility to ensure he allows a culture of innovative thinking at the workplace, encourage new ideas and help with technology infrastructure and funding to build new profitable products for the company. “In today’s rapid pace of digital transformation, it is vital to stay relevant and competitive. As leaders we need to nurture our employees in thinking innovatively and aid them in converting their ideas into marketable solutions,” says Khandelwal, adding that the best benefit for a firm is the low attrition rate because of the forward-looking employee initiatives.

Though the concept of intrapreneurial cells has been around for some time, it has become mainstream in India only recently. Companies like Google have long allowed employees to work on their own projects for 20 percent of the time. Thanks to this support, Google employees have come up with products like Gmail, Google News and AdSense in their “play time”.

What’s new in India when it comes to intrapreneurship is that traditional, non-digital companies are also encouraging employee innovation. Asian Paints, for instance, has started internal drives for employees to come up with business plans, aligned to their core business—be it a new vertical or a subsidiary business—which the company then funds, giving structural freedom to the employees and allowing them to run it like a startup. In April, Confederation of Indian Industry and Unfold, a consulting company, organized an Intrapreneurship Conclave in Bengaluru, where companies actively discussed decentralized innovation programmes that could empower employees to create new products and services. According to the report released at the end of the conclave, India presently has 50-60 corporate accelerators, and Indian arms of multinationals like McDonald’s and Indian companies like Infosys are already exploring innovation within.

An intraprenuer programme is not only about creating new businesses or an improvement of an existing one but also about empowering the in-house employees so they don’t leave their companies to do startups with the same idea, says GowriShankar Paramasivam, who leads the startup alliances and partnership programme within outsourcing company Maersk Global Services. “The programme liberates the thought process of employees who have the potential to do more and bring in actual change and develop new products for the company, without burning a hole through their pocket,” he says. Till now, the startup programme from Maersk, which started in January 2018 and still in its early stages, has funded two verticals within the organization.

For Rachh, the journey of being an intrapreneur is not too different from an entrepreneur. Ever since he joined the SAP accelerator, Rachh and his team focus all their time building Inversation by SAP.

As with every other new product, Rachh believes you need to create something that focuses on solving a problem while validating your assumptions with quick experiments. Teamwork is as important for an intrapreneur as an entrepreneur and you need complementing skills within the team members. The only difference when working within an entrepreneurship-encouraging company is that the product you develop is owned by the company funding it, something that would have happened anyway if Rachh and his team had approached a venture capitalist.

How to become an entrepreneur while working as an employee

Update your knowledge about the latest trends in your company and the industry.

Locate a pain point of your company’s customers and try to solve it. Business plans to capture new markets are always a favourite for companies.

Find a mentor and validate

One of the biggest advantages of working in a competitive company is the wide variety of mentorship on offer. Tap into advice from colleagues on whether an idea is valid in the market and how to develop it.

Present it to management

Convinced your idea is worth developing? Present it at your firm’s intrapreneurship programmes. If there are none, take it to the senior management. Leaders appreciate innovative concepts that make their company efficient and productive.