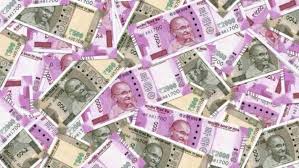 When demonetisation was announced by Prime Minister Narendra Modi in November 2016, one of the reasons given behind this radical move was to stop the flow of counterfeit currency in the country.

The new currency notes introduced by the government were purported to be equipped with advanced anti-counterfeiting features that supposedly made them impossible to duplicate.

However, less than three years later, counterfeit currency is flowing in the markets at a markedly higher rate.

According to information available with India.Today.in, Kailash, Mahesh and Haseen are residents of Mathura, Bharatpur and Agra respectively and they were arrested by the police with Rs. 3.12 lakh of counterfeit currency and a coloured printer.

Kailash confessed before the media that he used to push this counterfeit currency in rural areas where it was easier to circulate it. Three of his accomplices, Sachin, Sunder and Gulfam are absconding. Police are searching for them.

A bank employee told IndiaToday.in that this counterfeit currency was reaching Mathura banks in large numbers and several such cases have been uncovered in recent times. A number of people had been arrested in the past for circulating fake currency but nothing happened in those cases. If the counterfeiters are subjected to severe punishments, they will desist from taking such a risk.