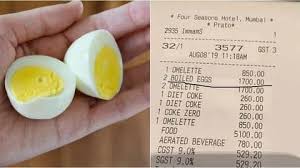 In July, actor Rahul Bose had tweeted a video in which he said that he was charged Rs 442.50 for two bananas at JW Marriott in Chandigarh following which the hotel had been at the receiving end of public anger and was fined Rs 25,000 by the Excise and Taxation Department of Chandigarh.

Now, it is a similar story though with different products where two boiled eggs have cost a customer Rs 1700. The incident reportedly occurred at the high-end Four Seasons Hotel in Mumbai.

Twitter user Kartik Dhar posted the bill with the caption, “2 eggs for Rs 1700 at the @FourSeasons Mumbai,” and also tagged Rahul Bose with the caption saying, “Bhai Aandolan Karein (Shall we protest)?”

Kartik Dhar, who is the author of “All The Queen’s Men”, was charged the same amount for two omelettes, as is visible in the bill posted by Dhar.

What followed was a flurry of funny and sarcastic reactions from the netizens. Sharing a few:

“Is ande ke sath Sona bhi nikla hai kya (Did the hen hatch gold with the eggs)?” posted one user.

Another posted: “Chicken must be from very rich family…”

“5100rs just for eggs, I would get my supply for the entire year,” said another.

“Etne praise mai toh mera pura maine ka rashan aah jayegha (I would get a month’s ration for this amount).”

The hotel was yet to issue a statement on this.