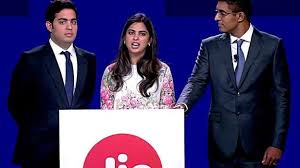 Reliance Industries Ltd chairman Mukesh Ambani kicked off India’s broadband wars on Monday, with the launch of feature-rich JioFiber, a wired internet service that hopes to replicate the runaway success of its Jio mobile service.

While some plans will come bundled with subscriptions to over-the-top content apps, premium users will get to watch movies on the day of their release from mid-2020.

“We will start this service commercially from 5 September at rates, which are one-tenth compared to global rates… JioFiber customers who opt for our annual plans, which we call Jio-Forever plans, will get an HD or 4K LED television and a 4K set-top box free. We are calling this the JioFiber welcome offer,” said Ambani, announcing plans to reach 20 million homes and 15 million business enterprises across 1,600 cities.

JioFiber is expected to trigger consolidation, largely among smaller broadband providers, just as Jio’s mobile services brought down the number of private telcos to just three. However, Jio’s broadband pricing is not as aggressive as that of its mobile service. For instance, ACT Fibernet’s lowest plan at 100mbps costs ₹749, while the cheapest monthly plan from Airtel at 40mbps in Delhi costs ₹799. Big operators in an under-penetrated broadband market could gain as small and local ones get edged out.

As of May-end, India had only 18.45 million wired broadband users as against 562.52 million wireless broadband subscribers, data from the telecom regulator showed, leaving significant room for expansion. The largest private operator in the wired broadband market is Bharti Airtel, which has 2.39 million users. India has 322 wired broadband providers, most of them small and local operators.

“Details of the tariff bundles are not out yet… at what tariff plan what all features will be available. This will provide more clarity on the level and extent of disruption that JioFiber will cause in the market,” a Mumbai-based equity analyst said, requesting anonymity.

“The current level of penetration (of wired internet) in the country is 7%. I think there is going to be a market explosion with Jio coming in. That’s where it will be good for all the players,” Bala Malladi, chief executive of ACT Fibernet, had said in an interview in February.

After majority stake buys in Den Networks Ltd and Hathway Cable and Datacom Ltd for ₹5,230 crore, and upgrading the infrastructure of local cable operators, Jio’s local cable partners will be able to offer HD channels through the JioFiber set-top box.