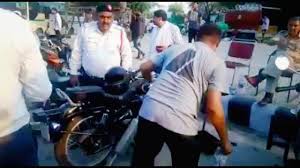 Noise pollution on Indian roads is a major cause of concern with commuters honking incessantly thus creating a lot of commotion and ill-effects. Motorists using aftermarket exhausts on their vehicles also add greatly to noise pollution and it is illegal to use too. Currently, a police drive in Delhi is seeing the cops catch Royal Enfield motorcycles in large numbers for breaking the law by using aftermarket exhausts, reported Cartoq. According to a video posted by Royal Soldier on Youtube, police personnel can be seen forming teams to catch the lawbreakers and issuing challan for using illegal exhausts. They can further be seen removing the exhausts on the spot so that bike owners cannot make use of them again.

In the video, the cops can be seen removing the exhaust on the spot where they have nabbed a particular Royal Enfield and then carefully marking them to keep a record. It is not known if the motorcycles were allowed to be ridden by the owners without exhausts, reported Cartoq. Notably, any vehicle can create loud noise if the exhaust is not installed and Royal Enfield is known to produce the characteristic thump on being started. The noise emanated can become extremely unbearable without the exhaust. The cops were also seen catching modified motorcycles with loud aftermarket horns and pressure horns, reported Cartoq. Extremely loud horns, if they exceed a specific noise level, are illegal in India and vehicles can be booked for noise pollution. The cops in the video can be seen removing the horns too and marking them carefully.

However, this is not the first time that cops have caught errant Royal Enfield owners. Earlier, police from other states have done similar drives against the Royal Enfield motorcycles, reported Cartoq, revealing that in many states, cops took extensive steps like destroying the exhausts completely to ensure that they cannot be used again. While Maharashtra cops used a special device to cut the silencer into half, police forces from Madhya Pradesh made use of a huge road roller to destroy the exhausts in full public view. Earlier the police would seize an owner’s entire motorcycle or the relevant documents from the owners. The documents would only get released after the owner of the motorcycle reversed back to the stock exhaust and came to the RTO for inspection.