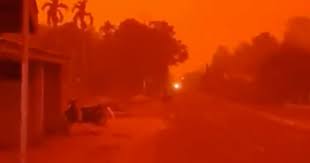 The skies over an Indonesia province have become so polluted by widespread forest fires that they began to glow a post-apocalyptic red over the weekend.

Some 900,000 Indonesians have suffered respiratory problems caused by extensive forest fires this summer, which are believed to have been started by illegal burning to clear land for farming.

A toxic haze has blanketed parts of Borneo and Sumatra in the past few months, according to the local authorities, and has triggered diplomatic tensions as it spreads to regional neighbours, including Singapore, Malaysia and the Philippines.

In the Indonesian province of Jambi, on Sumatra’s east coast, the haze took on an eerie blood red hue on Sunday, as the sun’s rays were filtered by microparticles in the air, prompting unsettled residents taking to social media to express their concern.

According to the Straits Times, citing the Indonesia National Board for Disaster Management, the phenomenon is known as “Rayleigh Scattering” and is caused by the movement of haze away from hot spots.

“Rayleigh Scattering happens when sunlight is dispersed by smoke, dust or airborne particles that filter shorter wavelengths and release longer wavelengths that are in the orange or red spectrum, making the area appear to be dim and red,” Marufin Sudibyo, an Indonesian astronomer, told the Malay daily, Sinar Harian.

He stressed that the odd glow would not damage human vision. The paper also reported similar scenes in Indonesia after the Krakatau volcano erupted in 1883 and Mount Pinatubo blew in 1991.

Haze occurs annually during the dry spell between July and October due to open burning in Indonesia and to lesser extent, parts of Malaysia.

Part of the problem is caused by big corporations and farmers, who use a slash-and-burn technique to clear land for palm oil, pulp and paper plantations.

This summer’s haze has been the worst in years and Indonesia last week arrested nearly 200 people for the fires which have caused air quality to plummet, thousands of schools to close, and some flights to be cancelled.

Jakarta has deployed thousands of troops as temporary fire fighters and used dozens of water-bombing aircraft to battle blazes.

The Indonesian authorities have also sealed off multiple plantations where land was spotted burning, warning that owners could face criminal charges if they were found to have started the fires without permission.

On Monday, several parts of southern Thailand, including the popular holiday destination of Phuket, also reported air quality reaching “unhealthy” levels due to the drifting pollution from Indonesia.