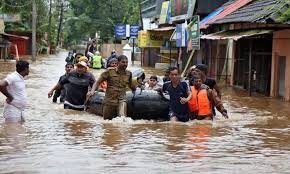 While Gowda blocked Sulibele on Twitter, the fight sparked a social media outrage with many targeting the Modi government using #NotFairModiji.

Sulibele first criticized the Union minister over the Karnataka floods when Gowda shot back saying, “I pity the people who have been giving false information to the people regarding the flood relief status. Union finance minister Nirmala Sitharaman, has already given information about the reports prepared by the state about the immediate funds needed for flood-affected areas, intermediate relief, and long term relief plans.”

Sulibele then replied, “Finally, this man has spoken!” He also said, “Don’t forget that the ministerial position is a gift to you by the people of the state. What is the use of the compensation if it does not come on time?”

Several Youth Congress workers took to Twitter to slam the Modi government over the delay in releasing funds for the flood-affected Karnataka.

Hemanth Krishne Gowda, campaign coordinator of the Youth Congress tweeted that PM Modi has no time for the people of Karnataka.

Amid growing criticism against the delay in release of central funds for flood relief, Karnataka Chief Minister B S Yediyurappa on Wednesday said it would be released in a couple of days as Prime Minister Narendra Modi was aware of the situation.

Yediyurappa’s assurance comes a day after the opposition parties in the state hit out at Modi, alleging he has adopted an “indifferent behavior” towards Karnataka on the issue of extending flood relief funds.

“There is no need for anyone, whether from our party or others to create any confusion. Relief funds have not been announced to any of the flood affected states in the country yet,” Yediyurappa said.

“Prime Minister Narendra Modi was outside the country, now he has come back, in another two to three days all affected states will get funds,” he said.