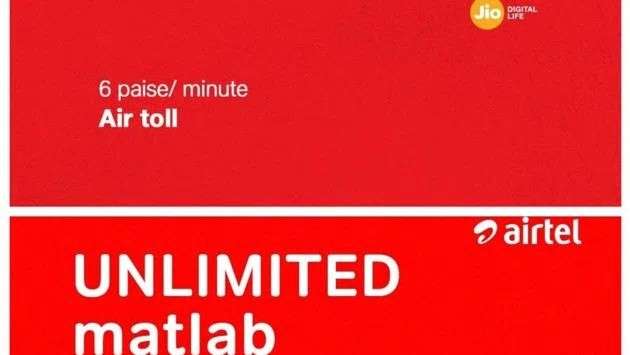 Reliance Jio has drawn sharp reaction from its subscribers as well as rival operators after it announced charging users 6 paise per minute for voice calls.

If official press releases were not enough, Vodafone Idea, Airtel and Reliance Jio are now taking it to social networking platforms to troll each over the issue.

The clip featured an equation which says free is not equal to 6 paise per minute. In another tweet, Airtel wrote, “When we say unlimited calling, we mean just that.”

Vodafone (@VodafoneIN) October 10, 2019
As expected, Reliance Jio fired shots at both the operators with a series of tweets. Taking a dig at Airtel, Reliance Jio said in a tweet, “6 paise/minute Air Toll” along with a disclaimer, “Every time a Jio customer makes an outgoing mobile call to other operator’s customer, 6 paise/minute is paid to the other operator as Interconnect Usage Charges (IUC), as per Telecom Regulatory Authority of India (TRAI) Regulations.”
In its latest tweet, Reliance Jio said “6 paise/minute. We ain’t asking for it. They are” along with the above mentioned disclaimer.

Reliance Jio (@reliancejio) October 12, 2019
In the case you haven’t caught up with why these telecom companies are at it again, here’s a brief recap for you.
Reliance Jio earlier this week announced dropping free voice calls for its subscribers. While the Jio-to-Jio calls remain free, calls on other networks such as Airtel and Vodafone Idea will now be charged 6 paise per minute – as per TRAI’s IUC norms.
The operator said it had paid nearly Rs 13,500 crore to rival networks as IUC in the last three years. It pointed out that the regulator had planned to end IUC regime by January 2020. The telecom regulator, however, recently floated a new consultation paper on IUC indicating a possible deferment.