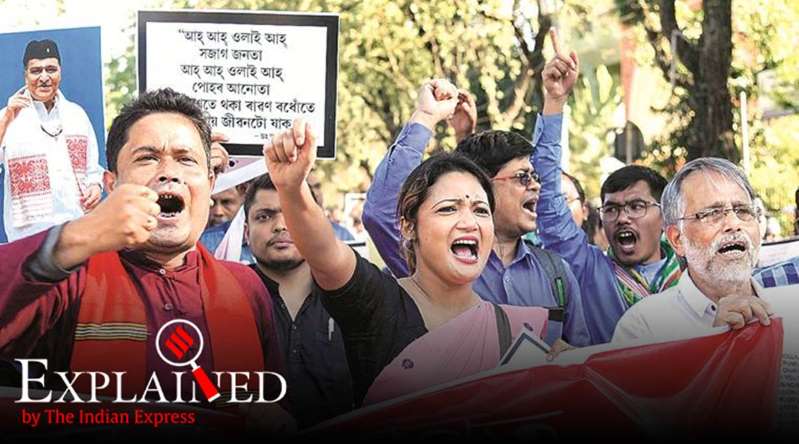 ON MONDAY, the government is set to introduce the Citizenship (Amendment) Bill (CAB), 2019, which proposes to make it easier for certain categories of migrants to become eligible for Indian citizenship. In the revised version of CAB, the Centre has exempted certain areas in the Northeast, where the Bill has been facing protests.

In effect, it exempts the whole of Arunachal Pradesh, Nagaland and Mizoram, almost the whole of Meghalaya, and parts of Assam and Tripura, but keeps all of Manipur under its ambit. (To address Manipur’s concerns, the government is expected to announce special provisions).

Why are three states totally exempted?

The Citizenship (Amendment) Bill (CAB) states: “Nothing in this section shall apply to tribal areas of Assam, Meghalaya, Mizoram or Tripura as included in the Sixth Schedule to the Constitution and the area covered under ‘The Inter Line’ notified under the Bengal Eastern Frontier Regulation, 1873.” The Inner Line Permit (ILP) system prevails in Arunachal Pradesh, Nagaland and Mizoram. In Nagaland, Dimapur town is not under ILP as of now.

How does the ILP system work?

ILP is a special permit that citizens from other parts of India require to enter the three states. It can be obtained after applying online or physically, and specifies dates of travel and areas which the ILP holder can travel to.

When the regime was introduced under the Bengal Eastern Frontier Regulation Act of 1873, the objective was to protect the Crown’s own commercial interests by preventing “British subjects” (Indians) from trading within these regions. In 1950, the Indian government replaced “British subjects” with “Citizen of India”, to address local concerns about protecting their interests.

What does this exemption mean for beneficiaries under CAB?

In ILP states, there are already a large number of migrants from other Indian states. They live and work there equipped with long-term ILPs, and renew these. The question now being asked, therefore, is whether a person who becomes an Indian citizen through CAB can, or cannot, apply for an ILP and work in such states, just like any other Indian citizen.

Also, multiple restrictions and regulations exist on entry and stay of “outsiders” (Indian citizens from outside that state/area) in areas under the Inner Line system or the Sixth Schedule. These existing rules are expected to put the same restrictions on someone who has acquired citizenship through CAB.

The exemptions appears to imply, however, that no immigrant non-citizen living in these areas can be regularised as an Indian citizen through CAB. “The exemption means that no… Bangladeshi will be allowed to settle in Mizoram and other ILP states under CAB. That is what our demand was — that even if CAB is passed, a state like Mizoram should be exempted,” said Vanlaruata, president of the central committee of the influential Young Mizo Association.

What is the Sixth Schedule, and which areas are exempted from CAB?

The Sixth Schedule of the Constitution, described in Articles 244(2) and 275(1), relates to special provisions in administration of Assam, Meghalaya, Tripura and Mizoram and provides special powers for Autonomous District Councils (ADCs) in these states. ADCs have powers to enact laws in areas under their jurisdiction on a variety of subjects, with the objective of ensuring development of tribal areas and boosting self-governance by tribal communities.

So, why has Manipur been an exception to both these kinds of regimes?

Manipur, like Tripura, was a princely state. When they joined the Indian Union (both in 1949; they became full-fledged states in 1972), they were out of the scheme of the Sixth Schedule, said L Lam Khan Piang, assistant professor at the School of Social Sciences in JNU.

“Only from 1985, the Sixth Schedule was implemented in Tripura’s tribal areas. When Tripura was given, the Centre had said that even in Manipur it would be extended shortly —but it never turned out to be a reality. However, in Manipur the state government had recommended three times for the Sixth Schedule… they recommended three times but they did not pursue it properly,” Piang said.

What about Manipur’s tribal areas?

Manipur has two geographically distinct areas. The valley, which includes Imphal, constitutes roughly 10% of the geographical area but holds around 60% of the state’s population. These belong mostly to the dominant Meitei community. The remaining 90% is hill areas, home to the other 40% that include a wide range of tribes, including Nagas and Kukis.

Piang said the Centre, while granting statehood, was aware that certain problems could come up for tribals and hence introduced Article 371C.

It mentions special provisions for Manipur: “… The President may, by order made with respect to the State of Manipur, provide for the constitution and functions of a committee of the Legislative Assembly of the State consisting of members of that Assembly elected from the Hill Areas of that State, for the modifications to be made in the rules of business of the Government and in the rules of procedure of the Legislative Assembly of the State and for any special responsibility of the Governor in order to secure the proper functioning of such committee.”

Piang said powers granted through this provision protect the tribals of Manipur in the Assembly, primarily through the Hill Areas Committee of the Manipur State Legislative Assembly — which comprises MLAs from the hill areas of the state.

Are there any other provisions for Manipur?

Last year, the Manipur People Bill, 2018 was passed by the Assembly. Said to be awaiting presidential assent, it proposes to several regulations on “outsiders” or “non-Manipuri people” in the state. The Bill had undergone series of negotiations on defining the “Manipuri” people, after which a consensus was reached on 1951 as the cut-off year.

What about other states in the Northeast?

In November this year, the Meghalaya Cabinet approved amendments to the Meghalaya Residents Safety and Security Act 2016, which will lead to laws that require non-resident visitors to register themselves. The move came in the backdrop of demands for an ILP-like regime and concerns expressed by civil society and political leaders, including Chief Minister Conrad Sangma, that people excluded from the National Register of Citizens (NRC) in Assam might try to enter Meghalaya.

In Assam too, there have been demands by certain sections for the introduction of an ILP regime. Groups such as the Asom Jatiyatabadi Yuba Chatra Parishad, a youth organisation, have been organising demonstrations seeking ILP throughout the state.