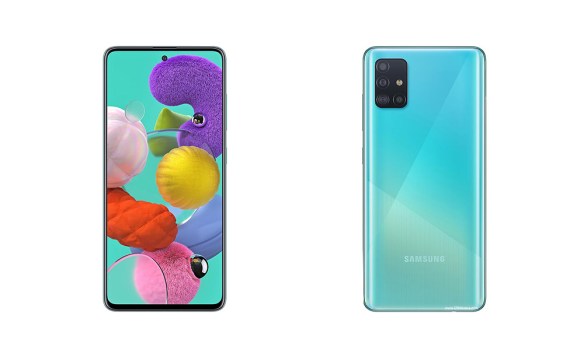 Samsung on Thursday announced the launch of two new smartphones under its A-series. Called Galaxy A71 and Galaxy A51, the two new Samsung phones come with punch-hole cameras and in-display fingerprint sensor. The two phones have launched in Vietnam.

Samsung hasn’t disclosed the price of Galaxy A71 yet. Galaxy A51 is available in Veitnam for 7,990,000 VND (Rs 24,300 approximately). The two phones will be available in black, silver, blue, and pink colour options.

Samsung Galaxy A71 comes with a 6.7-inch Super AMOLED display with Infinity-O cutout and full HD+ resolution. The phone runs on a 2.2Hz processor with up to 8GB of RAM and 128GB built-in storage (expandable up to 512GB via a microSD card).

Samsung Galaxy A71 is powered by a 4,500mAh battery with 25W fast charging support.

Samsung Galaxy A51 comes with a 6.5-inch full HD+ Super AMOLEd display with Infinity-O cutout. It runs on Exynos 9611 processor clocked at 2.3GHz with 4GB of RAM and 128GB of built-in storage. The phone supports expandable storage up to 512GB via a microSD card.

In the photography department, Samsung Galaxy A51 has as many as four rear cameras — 48-megapixel primary sensor, 5-megapixel macro sensor, 12-megapixel wide-angle sensor, and 5-megapixel sensor for depth. On the front, Galaxy A51 comes with a 32-megapixel selfie camera.

Samsung Galaxy A51 is powered by a 4,000mAh battery and supports 15W fast charging.