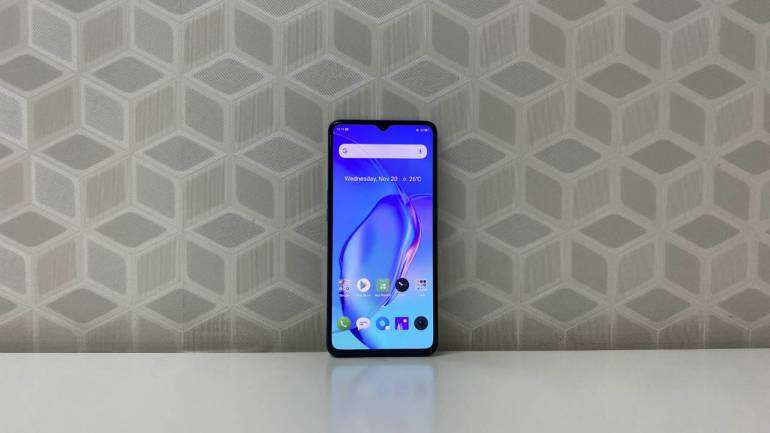 Realme also showed a glimpse of the Realme UI which is based on ColorOs which itself is based on Android 10. The Realme UI will come to all recent Realme smartphones and it is said to bring in a cleaner user interface more akin to stock Android interface. The biggest change to the homescreen is the addition of the Google Search bar under the apps tray. The new UI will start rolling out from January 2020 on the Realme 3 Pro and will come to other Realme phones slowly.

The Realme Buds Air is Realme’s first attempt at doing completely wireless earbuds. The Buds Air resemble the Apple AirPods in design and bring some of its features as well, but at a price that’s more affordable. Realme has given the Buds Air Qi-standard wireless charging similar to the new AirPods model —users can place the case on a wireless charger mat and recharge the battery. A USB-C port is also present for quicker wired charging.

The Buds Air promises 17 hours of battery life while the earbuds can individually go up to three hours at a stretch. Realme has given the earbuds some smart features such as wear detection, touch controls and support for voice assistants. The earbuds use 12mm drivers and it comes with dual mic setup to make for noise-free call quality. Realme has also built-in a low latency Gaming mode that will offer better audio transmission while gaming.

The Buds Air comes in three colour variants — Black, White and Yellow. Realme will put the Buds on sale from December 23 on Flipkart and it will set you back by Rs 3,999. Realme says if you lose any of the earbuds or the case, one can go to the Realme service centre and get a new one. Realme will also launch a 10W Qi-standard wireless charging pad that will launch soon.

As for the Realme X2, it comes in as an upgrade to the Realme XT with more performance. The phone uses a Snapdragon 730G chip from Qualcomm that should offer better performance while gaming.

Realme has also upgraded the charging system, swapping the 20W fast charging with its 30W VOOC 4.0 fast-charging system. The front camera also gets an upgrade in the form of a 32-megapixel camera which Realme says should take better selfies in all lighting conditions.

Rest of the specifications remain unchanged. The Realme X2 still gets the same 6.4-inch AMOLED display with Full HD+ resolution and an optical in-display fingerprint sensor. It also retains the same design as the Realme XT but gets a new green-coloured variant with a reflective gradient.

The rear camera setup also remains unchanged, spotting a 64-megapixel main camera paired with an 8-megapixel wide-angle camera, a 2-megapixel macro camera and a 2-megapixel depth camera. The phone runs on ColorOS 6.1 based on Android 9 Pie.

The Realme X2 comes in three colour variants and prices start at Rs 16,999 for the base variant with 4GB RAM and 64GB storage.