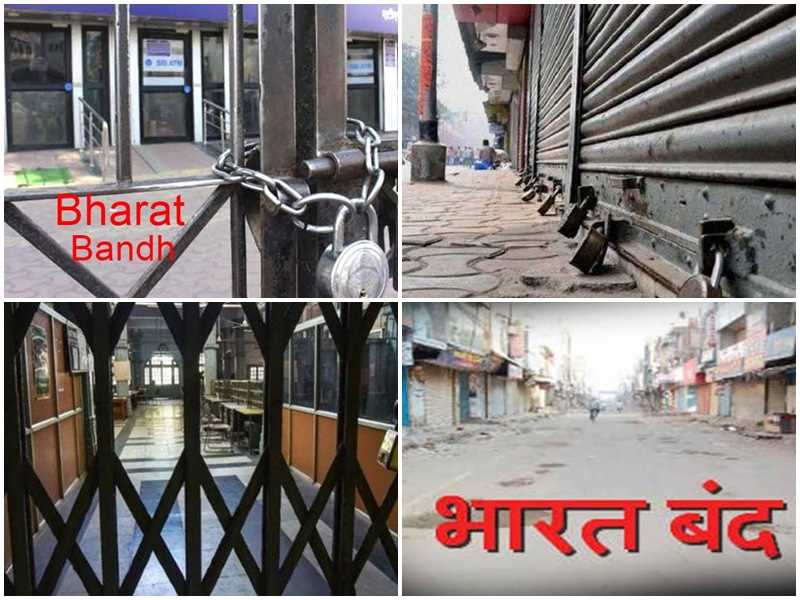 Bharat Bandh 2020 Live Updates: Trade unions across India have called for a nationwide strike today against alleged anti-working class policies of the Modi-led government. The joint statement by the 10 organisations claims that not less than 25 crore people will be participating in the strike today. The strike also has the support of the left lead farmer bodies. Banking, transport and other services across the country are also likely to be hit by the strike. Stay tuned as IndiaToday.in brings you Live Updates on Bharat Bandh.

Police in Andhra Pradesh arrested leaders of the Left parties and trade unions as they tried to stop state-owned buses and staged road blockade on Wednesday as part of the nation-wide shutdown.

Protesters were arrested in Vijayawada, Guntur, Ongole, Visakhapatnam, Kadapa and other towns when they tried to stop buses ofRoad Transport Corporation (RTC) from coming out of the depots.

The Chennai Police has detained a few protesters who were demonstrating as part of the Bharat Bandh that has been called today against the “anti-people economic policies”.

The nationwide shutdown call of the central trade unions against the Centre’s policies evoked a mixed response in Punjab, Haryana and Chandigarh on Wednesday amidst rains. There was no report of any untoward incident from anywhere in the states.

The activists of several farmer associations were seen asking traders at several places in Punjab and Haryana to keep their shops and business establishments closed to mark the pan India protest.

Road No 13A between Mathura Road and Kalindi Kunj closed for traffic movement. The Delhi Traffic Police has advised people coming from Noida are advised to take DND or Akshardham to reach Delhi

Congress leader Rahul Gandhi has backed those taking part in the nationwide bandh.

Today, over 25 crore workers have called for BharatBandh2020 in protest.

Puducherry on a complete shut down

No buses, trucks, autos or tempos on the roads today in view of the Bharat Bandh. Inter-state buses are also not plying. Shops, restaurants, and theaters to remain shut today.

Trade unions supported by Congress Party in Bandh in Bhubaneswar

Left trade union supporters CITU hit the railway track near Durgapur railway station. They tried to obstruct the goods train first but it didn’t stop. They have managed to stop one goods train.

In East Midnapore, protesters have blocked NH-41 at Mecheda in Haldia.

The CPI had on Monday appealed to people to support the January 8 all-India strike and ‘Gramin Bharat Bandh’ called by trade unions and farmers’ organisations, respectively, against the “anti-people” economic policies of the BJP-led NDA government.

CPI general secretary D Raja said the strike and the bandh had been called to draw attention of the people and the government to the bad state of the economy and the agrarian crisis in the country.

“We appeal to people to see through diversionary and divisive tactics of the government and make the proposed strike and bandh a success,” he said at a press conference at the CPI office here.

Ten central trade unions will go on a general strike or ‘Bharat Bandh’ on January 8 “to protest against the anti-labour policies” of the government. The Left parties too have supported the strike.

Several farmers and agricultural workers’ unions will also extend support to the strike and observe January 8 as ‘Gramin Bharat Bandh’.

Hitting out at the Prime Minister Narendra Modi-led government over its economic policies, the CPI leader said ever since the BJP government came to power in 2014, it has been aggressively pursuing economic policies that have brought “disaster to our economy”.

The government has repeatedly claimed that the economy is doing well. In fact, the economy has been sliding down, he said. Raja also released a paper titled “Comforting the Rich, Confronting the Poor”.

Ten trade unions have claimed that there will be about 25 crore people taking part in nationwide call for strike today, January, 8. The strike is called by trade unions against what they allege as “anti-people” policies of this government. The declaration for this strike was adopted in September 2019 by unions like INTUC, AITUC, HMS, CITU, AIUTUC, TUCC, SEWA, LPF, and UTUC among various independent federations.

The joint statement by the 10 organisations claims that not less than 25 crore people will be participating in the strike today. The unions have demanded reversal of “anti-working class, anti-people and the anti-national policies” allegedly implemented by this government. The unions in the joint statement have also accused the labour ministry of doing little to assure the workers of their demand. The unions have also condemned the violence on JNU campus and similar incidents in university campuses across India.

Apart from trade unions, farmers across the country under the banner of Leaft Peasant Wings will also be part of the strike. Bhumi Adhikar Andolan will observe Gramin Hartal, rail rook, and road rook on January 8 and 9.

Bharat Bandh: Banking services may be hit due to trade unions’ strike on January 8

Banking services at public sector banks are likely to be hit on Wednesday due to a nationwide strike called by 10 central trade unions. Most of the lenders have already informed stock exchanges about the January 8 strike and its impact on banking services.

Banking services like deposit and withdrawal, cheque clearing and instrument issuance are expected to be impacted due to the strike.

However, services at private sector banks are unlikely to be impacted. Nearly 25 crore people are likely to take part in an all-India strike on Wednesday to protest against the government’s “anti-people” policies.