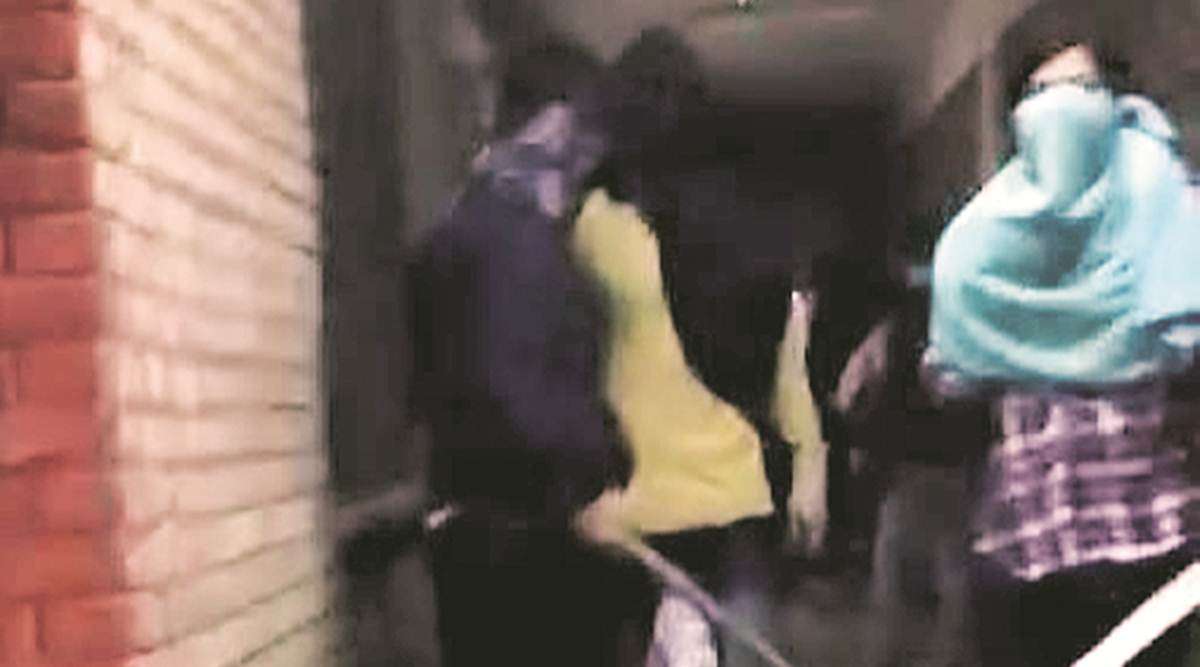 A special investigation team of the Delhi Police Crime Branch has identified a woman who was allegedly involved in the violence at Jawaharlal Nehru University on January 5, when groups of masked men and women with sticks had barged into Periyar and Sabarmati hostels and assaulted students and faculty, leaving 34 injured.

In one of the videos of the incident, a masked woman is seen wielding a stick and threatening students along with two other men inside Sabarmati hostel. Police said the woman has been identified as a student of Delhi University, but did not name her. It is learnt that the woman is from the ABVP, and her photos were widely shared by Left outfits following the violence.

In the video, the woman is seen wearing a check shirt and a blue scarf to cover her face. While the mob tries to push students, the person who shot the video points the camera at the masked woman and says, “She’s the girl who said she is a JNU student but she’s not… piche ja (go back).”

The woman and the two men then threaten students. When the students scream for help, the masked woman says, “Kya bolegi?” The two-minute video was shot in a corridor, where pieces of glass and broken furniture can also be seen.

A senior officer said, “The woman was identified through one of the videos of the incident. She lives in North Campus area. We approached her during the day but she was not home; her phone is switched off. We will send her a legal notice and ask her to come for questioning.”

As reported by The Indian Express, police had Saturday said they will also probe the role of DU students. This came a day after a few more suspects were identified from videos and photos of the incident. Police also said the two men will be identified once the woman is questioned.

On Friday, DCP (Crime Branch) Joy Tirkey, who is heading the SIT, released names of eight suspects, all students. Six of the eight were identified as members of Left-student outfits — SFI, AISA, AISF and DSF. Though the other two are from ABVP, police didn’t name the outfit.