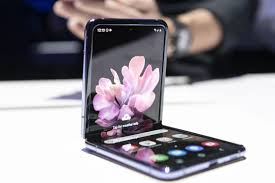 Many iPhone users are wed to Apple Inc.’s ecosystem, but the latest Galaxy device from Samsung Electronics Co. may finally get them to turn a curious eye.

The Galaxy Z Flip is Samsung’s second try at a compelling foldable device after last year’s Galaxy Fold. This sophomore effort costs a less astronomical $1,380, fits into much smaller pockets and opens and closes just like the flip handsets of years past.

The reactions — at least in Samsung’s home base of South Korea — to the foldable Z Flip have been instant and infectious. For a gadget intended to attract attention, this rethinking of the Android smartphone is off to a solid start. The Flip was released on Valentine’s Day and sold out on the first day in several key markets. It’s out of stock now on Samsung’s website, which went down for two hours around midnight Friday after a limited edition designed by Thom Browne went on sale. Posts of creative Flip accessorization are gaining traction on Twitter and Instagram. In a world of me-too mobile devices, the Z Flip is eye-catching. But it’s also an absolute fingerprint magnet that requires tender use and care.

“I’ve always stuck to the iPhone, but this is the most tempting moment to consider switching to Galaxy,” said Kyuhee Kang, a 29-year-old designer in Tokyo who’s been an Apple loyalist since the iPhone 4.

The 6.7-inch screen of the Galaxy Z Flip collapses into a palm-sized square akin to a Chanel compact — and Samsung encourages that luxury association with high-gloss finishes and a limited edition in collaboration with designer Browne.

Priced between the upgraded versions of Apple’s iPhone 11 Pro Max and 11 Pro, the Flip is a premium offering that Samsung wants to differentiate. There’s a certain nostalgic tug about answering calls by opening the gadget, then hanging up by snapping it shut. At the same time, it’s such a large device that if I were to operate it single-handedly every time I’d quickly develop thumb or wrist strain. Two hands are required for safety.

The still-nascent foldables category has two huge hurdles to overcome: proving its durability and offering sufficient, not necessarily superlative, specs. Motorola’s Razr, a close competitor to Samsung’s Z Flip, is thought to be fragile by at least one reviewer and is a step behind on almost every front: the camera, battery life, processor and display are all underwhelming.

True to its spec-obsessive pedigree, Samsung made sure the Z Flip is well stocked in most categories, though the Z Flip is noticeably behind on battery life. It has a large display but its battery is segmented in two because of the space requirements of its hinge, so it’s smaller. That hinge applies lessons learned from the Galaxy Fold and feels rigid and strong. One early Z Flip owner, however, managed to break his device’s display by merely flipping it open, and there’s been a controversy online about how easily the Flip’s ultra-thin glass gets scratched. Samsung says there’s a protective layer atop the glass and that’s what testers are able to scuff.

The hinge enables the Z Flip to stand at a variety of angles much like a laptop. This has allowed me to record my four-month-old puppy’s first bathing moment and shoot time-lapses of snowy scenes without a tripod. Couples may like the split-screen mode that lets them message each other on one half of the screen while watching or playing something on the other. The phone also becomes its own stand for watching videos and taking selfies.

Samsung still has room for improvement on the design of its foldables, which feature a chunky bezel that doesn’t sit flush with the display and thus prevents smooth swipes from the edge of the screen — required by Samsung’s own user interface. The Z Flip also has an underwhelming mono speaker. Last but not least, the 1.1-inch front display is too small to show anything more useful than an icon signifying the type of notification received.

Will iPhone fans end up abandoning their iMessages and Apple Music playlists? Probably not that many for this Flip generation, as the balance between price, benefits and compromises still has a way to go. But Samsung has crafted the most refined and fully featured foldable device to date. It won’t move the entire market just yet, but it’s stirring the interest that may yet make the foldable category a success.