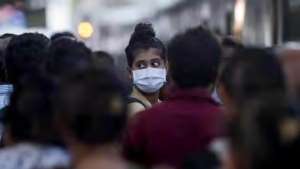 The novel coronavirus disease (Covid-19) has spread to at least 100 countries around the world.

In India, 74 cases have been reported so far and the government has cancelled all visas — except diplomatic, official, UN/International organisations, employment and project ones — till April 15 to contain the spread of the disease. Should we be worried? What have scientists found out about the virus so far? How does it cause infection and how do people die of it?

The Sars-Cov-2 virus moves from the back of the throat, to the lungs and then the blood, according to an analysis of the disease progression in 191 patients from Wuhan published in the journal “Lancet” on Wednesday.

For some time now, scientists have known that the virus spreads through respiratory droplets discharged by an infected person when they cough or sneeze. Others can contract the infection either by inhaling these droplets or touching surfaces on which these droplets land and then touching their eyes, nose, and mouth. This can be prevented by frequently washing hands for at least 20 seconds.

Once inside the body, the virus uses a spike-like protein to bind with a receptor called angiotensin-converting enzyme 2 (ACE-2) found on the respiratory cells, entering it and replicating to spread the infection within.

Fever, the first symptom, starts showing after an average five days of incubation period. This period between getting the infection and showing symptoms can extend to 14 and in some cases up to 27 days, according to studies.

For the first three days of onset of symptoms, the virus attacks the back of the throat causing sore throat and dry cough. Next, it moves down in the respiratory tract and starts causing laboured breathing between day four and day nine of onset of symptoms.

“In almost 80% of those infected there is only mild symptoms like this. Very few progress to the severe symptoms of sepsis and respiratory failure. The understanding of the disease is constantly changing. Most of our information currently is from China, with most of the publications coming from there,” said Dr Lalit Kant, senior advisor, infectious diseases at Public Health Foundation of India (PHFI).

As the virus keeps multiplying it reaches the lungs, causing inflammation in the alveoli or lung sacs filling them fluid and pus causing pneumonia. The inflamed lungs make it difficult for the person to breathe leading to acute respiratory distress syndrome between day eight and day 15 of the onset of symptoms.

“The disease first attacks the respiratory system, leading to respiratory failure in severe cases and it might enter the blood stream causing sepsis. Then, there can be secondary infections followed by death. This happens among senior citizens and people who have other co-morbid conditions like diabetes and hypertension,” said Dr Kant.

The virus has also been shown to cause some gastro-intestinal symptoms like diarrhoea. In the recent study, 5% of the admitted patients had it.

“Gastrointestinal symptoms are shown by less than 10% of those infected by Sars-CoV-2 as compared to 30% in persons with Sars [Severe Acute Respiratory Syndrome] in 2003. This is because both viruses use ACE-2 receptor to enter host cells. These receptors are the most highly expressed in the small intestine. Covid-19 patients shed virus in the stool as well, but that is not infectious,” said Dr Gagandeep Kang, executive director, Translational Health Science and Technology Institute.

How do people die?

The disease in known to kill between 3-4% of those it infects.

“Covid-19 is not very fatal, but it is very infectious. Since it infects more people, a large number die. In terms of infectivity, it is almost up there with the most infectious measles and chicken pox… We don’t really understand the reason for it right now. However, we know that it moves from the respiratory system to gastro-intestinal tract, to the blood, leading to multi-organ failure and death,” said Dr Shobha Broor, former head of microbiology department at All India Institute of Medical Sciences.

The recent study of the 191 adults admitted to Jinyintan and Wuhan Pulmonary Hospitals in China shows that 48% had a co-morbid condition – hypertension being the most common (30%), followed by diabetes (19%), and coronary heart disease (8%).

The average age of the non-survivors was 17 years more than the survivors, according to the data. “We do not know for sure why the disease is killing the senior citizens, but we know that as we age, the T-cells and B-cells responsible for our immune response are either slow, low, or high. There is a dysfunction in these cells making it difficult for them to prevent viral multiplication in the body,” said Dr Kant.

“Although the virus is around 70% similar to the one that caused SARS in 2003, it is not a very good similarity. This virus is closer to bat coronavirus. But, we can infer from the way SARS patients dies that even in this infection a cytokine storm might be leading to death,” said Dr Broor.

Cytokine storm is an over-production of immune cells in response to an infection that can result in damaging the body tissues and organs.