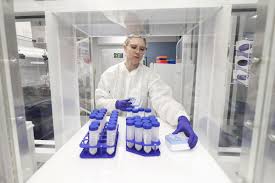 How does the PCR test look for the virus in swab samples? How long does it take? How many samples is India testing daily, and can it test more? If it can, why has it not scaled up yet?

What is the diagnostic test for the novel coronavirus that causes COVID-19?

The Indian Council of Medical Research (ICMR) has said designated labs will use the conventional real-time polymerase chain reaction (PCR) test, which is conducted on swab collected from the back of the throat, a liquid sample from the lower respiratory tract, or a simple saliva sample. Such tests are commonly used in Influenza A, Influenza B and H1N1 virus detection.

What is the PCR test?

It uses a technique that creates copies of a segment of DNA. ‘Polymerase’ refers to the enzymes that make the copies of DNA. The ‘chain reaction’ is how the DNA fragments are copied, exponentially — one is copied into two, the two are copied into four, and so on. Kary Mullis, the American biochemist who invented the PCR technique, was awarded the Nobel Prize for Chemistry in 1993.

However, SARS-COV-2 is a virus made of RNA, which needs to be converted into DNA. For this, the technique includes a process called reverse transcription. A ‘reverse transcriptase’ enzyme converts the RNA into DNA. Copies of the DNA are then made and amplified. A fluorescent DNA binding dye called the “probe” shows the presence of the virus. The test also distinguishes SARS-COV-2 from other viruses.

How long does the PCR process take?

Real-time PCRs have brought down the time taken to test samples to 4.5 hours from around 6 hours earlier, ICMR scientist Dr R R Gangakhedkar said. However, the overall turnaround time —from the time the samples are collected to when the report is delivered — is around 24 hours, and should be “less”, he said.

How is the test being done in India?

India currently conducts a two-stage real-time PCR to test for SARS-COV-2, said NIMHANS Senior Professor and Head of Neurovirology, Dr V Ravi. The first stage is designed to detect genetic elements common to human coronaviruses that may exist in the sample. The second stage is designed to test for specific genes present only in the SARS-COV-2 virus.

Until the beginning of March, the initial screening test to check for any type of coronavirus was done by all labs, but the confirmatory PCR was only done by the National Institute of Virology in Pune. “Then, NIV Pune transferred the technology (reagents required for the confirmation) to all labs so that there would be no need for a sample to go all the way to Pune. This has cut down on the time taken to test the samples,” Dr Ravi said.

India has the capacity to test 10,000 samples daily, and is currently testing around 600-700. By comparison, South Korea, which has a similar turnaround time, is reportedly testing up to 20,000 samples a day, especially using models like its drive-through testing facilities.

The government argues it is not necessary at this stage to test every person. The country is testing the cohort that it needs to test “for now”, said Dr Gangakhedkar. “If you go by localised transmission, we are testing enough. If you believe there is community-based transmission, then it’s a different issue. There is still no evidence where we do not know how the index case has acquired this infection,” he said.

“We don’t want to do any indiscriminate testing because now everybody is asking for a test. So, somewhere, we will have to rationalise it… but it is also important to keep an eye out so that we are not missing community transmission,” ICMR scientist Dr Nivedita Gupta said during a press briefing last week.

What will be the strategy if community transmission happens?

ICMR is conducting a surveillance for any evidence of community transmission, with each of India’s 52 testing labs testing 20 random samples of patients with Severe Acute Respiratory Infection (SARI). The ‘first cut’ of these tests are expected to be out on Wednesday. ICMR has said that, in the event that a case of community transmission is unearthed from these surveillance tests, the government’s strategies will be “completely different”.

Are there barriers to scaling up testing?

Cost is a potential barrier, feel some experts. ICMR officials had said in a conference that the cost of a primary test for COVID-19 is Rs 1,500. If a second test is to be done to confirm the results of the first test, the total cost is around Rs 5,000. One of the officials had also said that the probes used, which are imported from Germany, are a “limiting” factor.

While the number of testing centres has been increased, the imports of probes have also shot up. Last week, India wanted to import around 200,000 probes, whereas on Monday, Dr Gangakhedkar said the government was planning to import around a million.

Could India be doing things differently?

What India had started to do is “exactly” what was recommended for a country where the disease was “imported”, according to Translational Health Science and Technology Institute India’s executive director, Dr Gagandeep Kang. However, testing and follow-ups of those coming into the country, and putting those they have come into contact with under surveillance, is a “rational and appropriate” approach if the only risk was of importing the disease, and follow-up and testing was 100%, she said.

“But what can happen is that with this infection you can be shedding even before you develop symptoms, and in very few you might never have symptoms, so you could be transmitting it to other people without knowing you are infected,” she said. “This kind of complexity… makes it necessary to think about having a backup strategy to see if you’ve actually missed anything,” she said. “There is more that we could be doing.”

Will the ICMR surveillance help?

ICMR’s decision is a good step, but there are regions that such an exercise would then leave out, Dr Kang said. “If you are testing samples each week from each influenza lab, then if you find even one positive, that is going to tell you that you’ve missed a lot,” she said.

According to Dr Kang, it is possible to use mathematical modelling to understand what would give the government a “reasonable chance” of identifying whether there is already any community transmission. “I think it would be great to have the kind of model that Singapore has, where any doctor anywhere who had a clinical suspicion, even if it didn’t fit the description, was allowed to send their patient for a test,” she added.