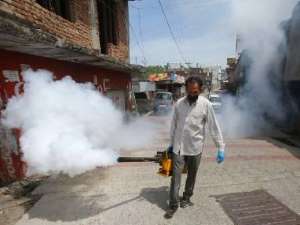 With India registering an increase of 591 coronavirus cases and 20 deaths in the last 24 hours, the focus in the fight against the deadly virus was largely towards how to implement lockdown measures strictly across the country.

From making masks mandatory to restricting movement of people in areas identified as COVID-19 hotspots, authorities across several states on Thursday also beefed up surveillance and enforcement measures to contain the deadly virus outbreak even as shortage of protecting gear remained a concern.

While Odisha became the first state to extend the lockdown further till 30 April and also announced closure of schools till 17 June, Maharashtra, which saw its tally of confirmed infections crossing 1,300 with at least 97 deaths, announced plans to install forces in hotspots to enforce compliance to lockdown.

Several other states including Karnataka, Tamil Nadu and Chhattisgarh said they will take a final decision in the coming days on whether to extend or not the 21-day nationwide lockdown, which entered its 16th day on Thursday.

The health ministry on Thursday reported 20 new deaths in the last 24 hours, taking the toll due to the novel coronavirus to 169, whereas, the number of cases climbed to 5,865 in the country.

The number of active COVID-19 cases is 5,218, as many as 477 people have been cured and discharged and one has migrated, the ministry said.

However, a PTI tally of numbers reported by various states and union territories at 10 pm showed as many as 6,640 people having contracted the virus and at least 227 losing their lives so far. Nearly 600 have so far been cured and discharged.

Of the new deaths reported on Thursday, eight were from Maharashtra, three each from Gujarat and Madhya Pradesh, two from Jammu and Kashmir and one each from Punjab, Uttar Pradesh, Karnataka and Tamil Nadu.

Based on state figures, Maharashtra saw the total number of people having tested positive reach 1,364 — the highest in the country on Thursday.

Tamil Nadu had the second most number of cases at 834, followed by 720 in Delhi as on Thursday evening. Telangana, Rajasthan and Uttar Pradesh have reported over 400 cases each, followed by Madhya Pradesh, Kerala and Andhra Pradesh among other states.

There is a lag in the Union Health Ministry figures, as compared to the number of deaths announced by different states, which officials attribute to the procedural delay in assigning the cases to individual states.

The health ministry’s data put the highest number of confirmed cases in the country in Maharashtra at 1,135, followed by Tamil Nadu at 738 and Delhi with 669 cases.

The number of cases has risen to 442 in Telangana, while Uttar Pradesh has 410 cases and Rajasthan 383. Andhra Pradesh has reported 348 cases, while Kerala has 345 COVID-19 patients.

The number of coronavirus cases has risen to 259 in Madhya Pradesh, 181 in Karnataka, 179 in Gujarat and 169 in Haryana.

Odisha has reported 42 coronavirus cases, 39 people have been infected with the virus in Bihar, while Uttarakhand has 35 COVID-19 patients and Assam 28.

Chandigarh and Himachal Pradesh have 18 cases each, while Ladakh has 14 and Jharkhand 13.

Eleven cases have been reported from the Andaman and Nicobar Islands, while Chhattisgarh has registered 10 cases.

“State-wise distribution is subject to further verification and reconciliation,” the ministry said on its website.

Ministry urges rational use of PPEs

The Union Health Ministry stressed on the rational use of personal protective equipments (PPEs) by healthcare workers treating coronavirus patients amid concerns over their dwindling numbers in the country.

Health ministry joint secretary Lav Agarwal said there is no need to panic as India has sufficient stocks of PPEs and the government is making all efforts to augment their supply further.

At his daily briefing on the COVID-19 situation, he said orders for 1.7 crore PPEs have already been placed with domestic manufacturers and supply has already begun. He also said PPEs should be used rationally on the basis of risk profile. Orders for 49,000 ventilators have been placed too, Agarwal said.

Meanwhile, ICMR has given permission to the Kerala state government to conduct trials on convalescent plasma therapy — a process in which blood plasma from a patient who has recovered from COVID-19 is infused into a critically ill patient so that the specific antibodies present in the blood of the recovered person can help fight the infection.

Amid rising numbers across states, authorities announced strict measures to enforce the lockdown and further restrictions including complete sealing of areas identified as hotspots of the virus spread.

After extending the lockdown for two more weeks, Odisha government also promulgated an ordinance with provision of imprisonment up to two years for those who violate the epidemic regulations.

The Maharashtra government said that is mulling complete shutdown in certain areas, including of markets, and is also mulling deploying forces in congested areas.

Rajasthan made it mandatory for people to wear masks in urban areas and mandis, while the same was made compulsory for everyone stepping out in Madhya Pradesh as also for people in various cities of Maharashtra besides Mumbai.

Delhi and Uttar Pradesh had announced similar measures on Wednesday.

Also, Maharashtra and Madhya Pradesh expanded the list of containment zones that would be sealed off completely, after similar steps taken by Delhi and Uttar Pradesh a day before.

In Karnataka, Chief Minister BS Yediyurappa said all his cabinet colleagues are of unanimous opinion to extend the lockdown for about 15 days after 14 April, and a final decision in this regard will be taken after consulting the Prime Minister.

Prime Minister Narendra Modi is scheduled to interact with all chief ministers on Saturday to discuss the way forward in the COVID-19 fight, including the lockdown.

In Jharkhand, Chief Minister Hemant Soren said lifting the lockdown is a “big challenge” and must be given a considered thought. In an interview to PTI, he said the spread of the coronavirus has been kept in check in his state, but things could change if a large number of people return to the state from other parts of the country.

Tamil Nadu chief minister E Palaniswami said a decision on extending the lockdown will be taken after getting expert advice and taking into account the increase in the number of coronavirus positive cases.

Chhattisgarh Chief Minister Bhupesh Baghel said he would take a decision only after consulting the state cabinet on 12 April.

In Delhi, Chief Minister Arvind Kejriwal warned of strict action against those misbehaving with healthcare personnel in the city in the wake of the coronavirus outbreak.

The warning came a day after two women resident doctors of Safdarjung Hospital were assaulted following rumours that they are “spreading COVID-19” in the Gautam Nagar area.

The pandemic has also seen a sharp rise in hate crimes.

Worldwide, the number of confirmed COVID-19 cases has climbed to more than 1.5 million, with nearly 90,000 deaths, according to Johns Hopkins University.

The US on Thursday continued to lead in terms of total number of confirmed infections with over 4,30,000 cases, three times the number of the next three countries combined, and around 15,000 deaths.

According to AP, New York state reported 799 more deaths, its third straight day of record-high fatalities. More than 7,000 people have died in the state.

Around the world, authorities warned against travel during the Easter and Ramadan religious holidays.

German Chancellor Angela Merkel emphasised that “even short trips inside Germany, to the seaside or the mountains or relatives, can’t happen over Easter.”

The Dutch prime minister said border crossings with Germany and Belgium could be closed over the weekend if there is too much traffic.

New Zealand police warned people not to drive to vacation homes over Easter and risk arrest, while Lithuania moved to lock down major cities. Portugal halted commercial flights and set up checkpoints on major roads.

Iran’s Supreme Leader Ayatollah Ali Khamenei suggested mass gatherings may be barred through the holy Muslim fasting month of Ramadan, which runs from late April through most of May.

Iran has reported over 4,100 deaths, although experts suspect the outbreak is worse that that.

Indonesia’s president banned civil servants, police officers, military personnel and employees of state-owned companies from returning to their hometowns to celebrate the end of Ramadan. Typically tens of millions Indonesians crisscross the archipelago of 17,000 islands at that time of year.

Britain’s Prime Minister Boris Johonson spent a third night in intensive care with COVID-19. His spokesman said he was continuing to improve. Britain recorded 881 new deaths, for a total of close to 8,000.

Japan reported more than 500 new cases for the first time, a worrisome rise since it has the world’s oldest population and COVID-19 can be especially serious in the elderly.

Prime Minister Shinzo Abe has declared a state of emergency, but not a lockdown, in Tokyo and six other prefectures. Companies in the world’s third-largest economy have been slow to embrace working from home, and many commuters jammed Tokyo’s streets as usual.

New infections, hospitalisations and deaths have been leveling off in hard-hit Italy and Spain, which together have around 33,000 deaths, but the daily tolls are still shocking. Spain reported 683 more deaths, bringing its total to more than 15,200.

Spanish Prime Minister Pedro Sánchez acknowledged authorities were caught off guard by the crisis and failed to provide hospitals with critical supplies, including virus tests and protective clothing for medical workers.

“Europe reacted late. All of the West reacted late, and Spain is no exception,” Sánchez said.