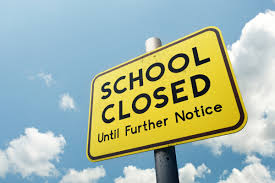 COVID-19 School Cancellations in Every State

As the COVID-19 pandemic has spread across the U.S. and the world, nearly every part of daily life has been disrupted. For children, this has meant that the school year has been put on hold. As states have largely been left in charge of the details of their coronavirus response, governors and education departments have taken varying stances on when to shut down schools and for how long.

Some states have effectively cancelled classes for the rest of the academic year, while others are hoping to come back in April. Some governors were much more proactive than others, cancelling classes in mid-March. One state did not institute school closures until April.

24/7 Wall St. reviewed data gathered by Education Week, an independent news organization covering K-12 education data and policy, which lists school cancellations by state due to the coronavirus. The K-12 population for both public and private schools came from the U.S. Census Bureau’s 2018 American Community Survey. Data on COVID-19 cases per capita came from the New York Times and is accurate as of Apr. 5.

Education Week noted that five states — California, Florida, Kentucky, South Dakota, and Tennessee — recommended that schools be closed, but in many cases the decision to shut down was left to the local level. All schools in these states have reportedly adhered to the recommendation and were closed as of early April.

It may be impossible to know the effect that such a long hiatus will have on students, though research suggests it could harm their future educational success. Some teachers have continued educating their students using videoconferencing software. School districts that have the funding to provide these tools can help mitigate any negative effects caused by the disruption, which could help a higher share of students complete their education and reach graduation. These are the cities where the most people graduate high school.