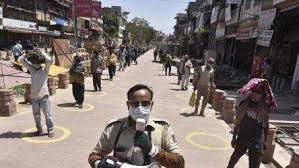 Chandni Mahal, Nabi Karim and Sadar Bazar in Old Delhi, G and D blocks of Nizamuddin West in the south-east district, and B block in north-west Delhi’s Jahangirpuri, apart from the two designated coronavirus disease hot spots at Nizamuddin Basti and Dilshad Garden, are among the 47 containment zones declared by the Delhi government to contain the spread of the coronavirus disease (Covid-19).

But the reason why these areas have been picked for greater curbs are varied — from population density, to awareness, to a cluster of infections, to proximity to high-risk areas, to the inability to track the source of infection.

Multiple state government officials HT spoke to said that there were no common rules, guidelines or checklists to define containment zones.

An order by the Delhi government’s directorate general health services, dated April 12 said that containment activity can be undertaken “even if there is a clustering of three cases.” But the order also said that a final decision will be “taken on the ground by the district authorities as per the geographical boundaries of the area of the cluster”.

“The aim is to stop the chain on of transmission of Covid-19. We are declaring an area a containment zone, even if there is just one case but if we feel there is a threat of clustering or community transmission. While basic guidelines have been given to district administration, but the final decision is left to the medical team and the district magistrate at the ground level,” said a senior district official who asked not to be named.

So, for example, Chandni Mahal, Nabi Karim and Sadar Bazaar were sealed after small clusters of Covid-19 cases was reported in these areas; parts of Nizamuddin West neighbourhood were declared containment zones because of their proximity to Tablighi Jamaat headquarters in Nizamuddin Basti; and Vardhaman Apartments in Mayur Vihar was declared a “red zone” though there was just one case reported because the common areas and utilities of the society were found hard to protect from contamination.

While there is a 21-day lockdown in place across the country, the containment zones have stricter restrictions. People living here — the zone could be a block, a street, a plot, or just a building — are not allowed to step out of their houses, and essentials are home-delivered directly by the authorities.

They are also subjected to the Delhi government’s enhanced safety protocols — described last week by chief minister Arvind Kejriwal as “Operation SHIELD”. The S stands for sealing, H for home-quarantine, I for isolation and tracing, E for essential supplies, L for local sanitisation, and D for door-to-door checking.

“The objective is to contain the area so that proper disinfection of the neighbourhood and screening of residents can be done to avoid further spread of the virus. A neighbourhood in south Delhi’s Deoli was declared a containment zone after eight members of a family were found positive with Covid-19. Similarly, some areas around the Markaz building in Nizamuddin were turned into containment zones after many people evacuated from there were tested positive with Covid-19,” said joint commissioner of police (southern range) Devesh Chandra Srivastava.

While these parameters seem obvious and objective, the selection of areas where there are no more than one or two cases is more complicated, and based on subjective calls by health officials.

A second senior government official who asked not to be named said that one of the key parameters considered while deciding these areas required enhanced containment was unclear source of infection, which could be a sign of “community transmission” — the third stage of the spread of any infection in which the chain of contamination can no longer be established. Once stage three sets in (the first two stages are travel history and local transmission), the next level is epidemic.

There are several containment zones where only one case was reported. These include Gandhi Park in Malviya Nagar, and the slum cluster at South Moti Bagh (south Delhi); H and E blocks of Abu Fazal Enclave, Garhi village in East of Kailash, and Mahella Mohalla in Madanpur Khadar (south-east Delhi); and Kalyanpuri, Khichripur and Pandav Nagar in (east Delhi).

“A majority of these areas are thickly populated. To break the chain of transmission of the virus, it was felt necessary to declare them as containment zones and screen all the people even though in some areas the patients have recovered. In some areas, the contact history of the patient is yet to be traced due to which chances of more testing positive area high. We are screening all the households in the containment areas and also doing testing of suspected cases,” said the second official cited above.

The “densely populated” theme runs across at least 25 of the 47 zones and includes the working-class neighbourhoods of Kalyanpuri, Khichripur, Madanpur Khadar, Jaitpur Extension, Deoli and Sangam Vihar, where officials say the awareness of social distancing is limited as compared to the city’s relatively upscale colonies.

“To ensure that the spread of the disease is contained, some aggressive measures have to be taken else it can lead to community transmission. This may be the reason why some of the areas have been declared as containment zones despite just 1-2 cases being reported from there,” said DrJugal Kishore, head of the department community medicine at Safdarjung hospital.

In south-west Delhi’s Mahavir Enclave, which was declared a containment zone on Sunday, a nurse working at a hospital that has a Covid isolation ward was diagnosed last week. Her two children and a neighbour also tested positive. “It’s a dense pocket where people interact frequently. So the risk of transmission is very high. We tested as many as 70 persons in the containment area today, and the results are awaited,” an official said.

Several officials said the biggest problem Delhi was facing was the possibility of “clustering” in residential localities. “With the movement of residents restricted in containment zones, the district administrations have got some success in slowing down the transmission. Extensive door-to-door screening in each containment zone is also helping identify new cases,” said the first official.

Some of the areas where clustering appears to have occurred — apart from Nizamuddin Basti and Dilshad Garden — are in central Delhi. Of the 13 deaths reported in the district, five were reported in Chandni Mahal and four in Sadar Bazaar.

“Out of 102 people staying in 13 different locations in the Chandni Mahal area, 52 have tested positive. The interaction between people who tested positive and residents of Chandni Mahal can’t be ruled out,” according to the Friday order designating the area a containment zone, issued by the Delhi government’s Central Zone district magistrate, Nidhi Srivastava.

“When Sadar Bazar was declared a containment area there were seven cases and now there are 18 Covid-19 positive cases,” said a senior central district official aware of the development.

The government says that its “SHIELD programme” is also allowed them to test those with symptoms, isolate and treat patients, and stop further transmission.

Delhi’s health minister Satyendar Jain on Friday had said that Dilshad Garden, a Covid-19 hot spot, was “Coronavirus free” with no new cases reported in the last 10 days due to measures taken under the SHIELD programme. Dilshad Garden was among the first areas to be declared a containment zone on April 8.

“It is a good thing they are doing by declaring containment zone even if there is one case reported from the area. If these measures are not taken right now, the situation will boomerang. Contact tracing and surveillance is the key to contain the spread of transmission of this disease,” Dr Kant said.