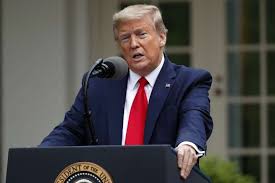 President Donald Trump on Tuesday said he’s fine with governors making their own decisions on how to reopen their states — a retreat from the day before when the president insisted that such choices were up to him because his “authority is total.”

Trump’s comments in the White House Rose Garden came as states across the northeast and pacific coast launched separate regional pacts to plan for how they plan to open up and get the economy going again.

The president said his administration will be providing states with guidelines in the coming days and he plans to soon speak with all 50 governors via conference call.

“I will be authorizing each individual governor, of each individual state, to implement a reopening and a very powerful reopening plan of their state in a time and a manner as most appropriate,” Trump said. “The day will be very close. Cause certain states are in much different condition and in a much different place than other states. It’s going to be very very close.”

“The federal government will be watching them very closely and will be there to help in many different ways,” he said, adding, “The governors are going to be opening up their states. They’re going to declare when. They’re going to know when. Some can open very very shortly.”

Trump caused a stir Monday when he tweeted that it was his decision on whether or not to open individual states, something he expanded upon at Monday’s press briefing. It was an assertion that was quickly pushed back on by constitutional scholars, Democrats, and some leading Republicans.

At that briefing, he said the president “calls the shots,” governors “can’t do anything without the approval of the United States,” and that his “authority is total.”

At that briefing, he said the president “calls the shots,” governors “can’t do anything without the approval of the United States,” and that his “authority is total.”

The authority to require businesses to close in a public health crisis is what is a known as a “police power,” and it is reserved by the Constitution to the states, not to the federal government. Because the states instituted the shutdowns, they will have to be the ones to lift them.

Still, the president can use the bully pulpit to push governors toward reopening their states.

But Tuesday he said he would not be doing that.