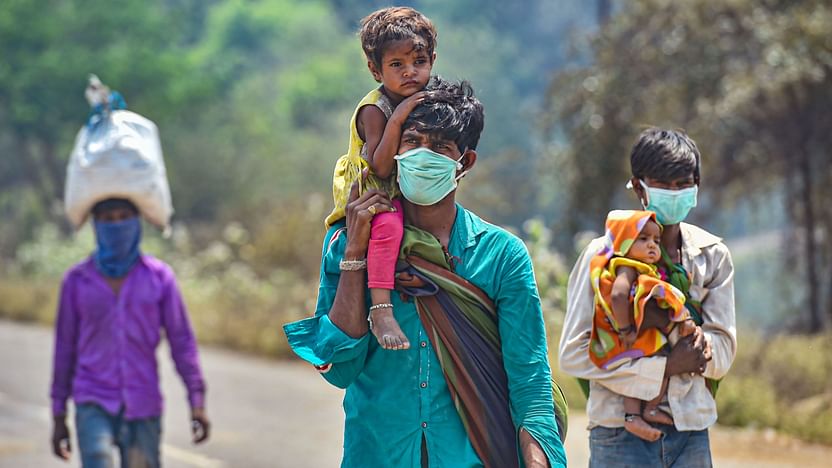 WITH certain manufacturing units set to commence work on April 20, the Centre on Sunday allowed movement of migrant labour between districts within a state. While allowing their movement by buses, it asked local authorities to ensure social distancing, and arrange food and water for them along their journey to the workplace.

The movement of labour between states, however, remains prohibited.

In its notification, the Ministry of Home Affairs (MHA) asked local authorities to first register all migrant labour in camps and shelters, and then undertake a skill mapping exercise to ascertain their suitability for various works. The notification comes in the backdrop of industrial units expressing their inability to commence operations despite relaxations (announced through an earlier April 15 order) which are effective Monday. The industry had since informed the government about the difficulty in organising in situ accommodation, and arranging private transport for workers whose accommodation cannot be arranged.

In a snap survey conducted by the Maharashtra government, seven out of 10 big manufacturing and industrial establishments had expressed their inability to provide accommodation to workers within or near their premises. Also, three in four were unwilling to arrange transport for staffers.

An official in Maharashtra’s industry department said Centre’s notification would help certain industries. “The move will benefit some industries, but it will take at least two days to know how many industries will require labour from other districts,” said Harshdeep Kamble, Development Commissioner (Industries). On Friday, while allowing units in rural areas, industrial estates and townships except Mumbai and Pune, Maharashtra had said transportation of workers to workplace had to be arranged by the employers.

In Gujarat, a senior government official said, “It will be best if the concerned industry has lock-in facility for (the staying of the) labourers at the establishment itself with precautions like social distancing, sanitisation, face masks, segregated canteen, thermal scanning etc.. If the lock-in facility is not there, the industries can bring labourers in their dedicated transport like buses or cars.”

The official, who did not wish to be identified, said the responsibility of taking care of all precautions will rest with the company. The state would bring more clarifications on the movement of labour force in the next two-four days, he said.

The MHA communication to states said, “In the event a group of migrants wish to return to their places of work within the state where they are presently located, they would be screened and those who are asymptomatic would be transported to their respective places of work…. During the journey by bus, it would be ensured that safe social distancing norms are followed and the buses used for transport are sanitised as per the guidelines of the Health authorities.”

Notably, the Centre has it was incumbent upon states under the Disaster Management Act to organise transport and provide for food and water to migrant labour.

“It may be noted that there shall be no movement of labour outside the State/UT from where they are currently located…. The National Directives for COVlD-19 Management issued under the consolidated revised guidelines dated 15th April 2020 shall be strictly followed,” the SOP said.

Acknowledging the need to allow movement of labour, the MHA order said, “Due to the spread of COVID-19 virus, workers employed in industry, agriculture, construction and other sectors have moved from their respective places of work, and are housed in relief/ shelter camps being run by State/ UT Governments. Since additional new activities, outside the containment zones, have been permitted in the consolidated revised guidelines with effect from 20th April 2020, these workers could be engaged in industrial, manufacturing, construction, farming and MNREGA works.”