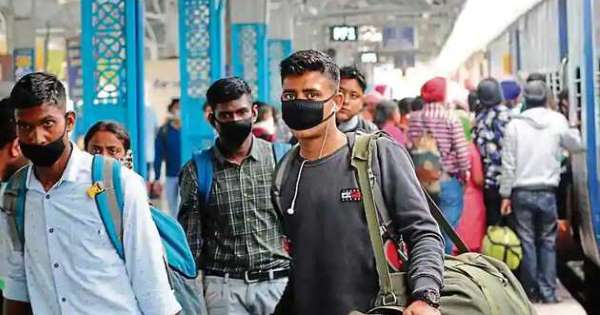 The number of Covid-19 cases in India rose above the 20,000-mark on Tuesday, but the rate at which this threshold was crossed – it took more than 8 days for the tally to double – raises hopes that the country may be able to avert the sort of devastation seen in some other parts of the world.

Globally, there are now 2.5 million infections and close to 175,000 deaths. In India, the number of fatalities as on Tuesday was 644.

The outbreak in the country began in early March after people who flew in from abroad introduced the infection to others, and has grown largely in small clusters – except for the one linked to the religious group in Delhi that led to thousands of infections – after the government enforced what is the largest global shutdown in population terms.

“Our doubling time of cases is increasing. The current situation indicates that significant increase in number of Covid-19 cases is unlikely,” said Dr Raman Gangakhedkar, the head of infectious diseases, Indian Council of Medical Research (ICMR).

In contrast with India’s rate of increase, the United States, which now has the highest number of infections at over 800,000, went from 9,000 infections to over 24,000 infections in three days.

But within the 1,504 new cases and 54 new deaths on Tuesday lurked a statistic that threatens to reverse India’s gains: Maharashtra, the second-most populous state in the country, accounted for more than a third of all new cases recorded on Tuesday, and Gujarat, which till a week ago had a little over 500 infections, now has over 2,000 cases.

At four days, Gujarat’s doubling rate was less than half the national average – suggesting the spread was happening twice as well.

“We have managed to buy time to be able to provide hospital care to all our positive cases, and have tried as much to flatten the curve so that there is a possibility that we are able to push it so much that we might actually get a vaccine or an effective drug to treat patients,” said Gangakhedkar added.

This weekend, India will complete a month in lockdown – a near-total interruption of normal life for more than 1.3 billion people, many of whom are from vulnerable socio-economic backgrounds, stuck in cities where they had migrated to for work but now find themselves jobless. Schools, colleges and any transport of individuals between two cities seems unlikely for the time being.

According to a Union health ministry last week, there are at present 170 hot spot districts, which house roughly 37% of the population and make up 29% of the geographical area of India.

“Now, we have added 61 more districts that have not reported any new case in the last 14 days,” said Lav Agarwal, the joint secretary of the Union health ministry, during the daily government briefing on Tuesday.

The lockdown will stay till May 3, but officials at the highest levels of the government are working on opening some regions and industrial sectors to ease access to products and employment.

The lifting of the curbs must not be hasty, the head of World Health Organization said at a press briefing in Geneva on Monday, as signs poured in from the world over that the sweeping shutdowns had worked to suppress the spread of the disease.

For now, authorities across the country are attempting to ramp up testing in order to get a better sense of the contagion, which will make the task of isolating the outbreaks easier and allow other regions to safely resume some activity.