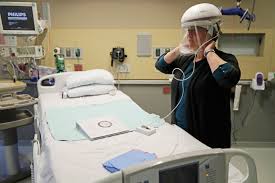 City hospitals might have become the new “high-risk” areas, with more and more doctors and patients testing positive for the coronavirus disease (Covid-19). The district authorities had raised the issue with the lieutenant governor this week.

Fifty-seven healthcare workers—including 21 doctors at the Delhi-government run Baba Saheb Ambedkar Hospital in Rohini—are being tested for Covid-19 after coming in contact with a suspected patient in the emergency department last week. The 40-year-old woman from Jahangirpuri was admitted to the hospital’s medical emergency ward in isolation, where she later died.

There was a similar scare in Bhagwan Mahavir Hospital last week, where 68 members of the staff had to be quarantined. However, they returned to duty a day later when the suspected patient tested negative.

In Jahangirpuri’s Babu Jagjivan Ram Memorial Hospital, staff members started testing positive for Covid-19 over the weekend. Till Thursday evening, 10 healthcare workers—some asymptomatic—tested positive for the infection. Around 191 hospital staff had to be quarantined.

“We do not know where they got the infection from; however, this area is a hot spot. Many of our staff members live around the area and patients from the area also come here. We do screen them for symptoms before allowing them in, but if they are asymptomatic carriers, what can we do?” said a doctor from the hospital, on condition of anonymity.

To prevent infection within the hospitals located in hot spots, the union health ministry on Monday had advised a clear demarcation between the out-patient clinics and the wards where patients are tested for Covid-19 and admitted.

This, however, is not the norm in Delhi. All of the 11 districts in Delhi are hot spots.

All hospitals have set up flu clinics that are separate from the main building to screen patients for fever and cough and any history to suggest contact with a positive person. Only those that the doctors suspect are asked to get tested.

Looking for an infection, however, is not enough as even Indian Council of Medical Research—the country’s apex health research body—says that 80% of the people either have nil or very mild symptoms.

“Hospitals are likely to become high-risk areas. This is because the doctors are not testing everyone—that is not possible. What we are doing is running flu clinics—if you have fever, cough and cold you go there. So, if a large number of the population has no symptom, then if they will infect doctors and nurses once they get to the hospital, who will then pass it on to others—colleagues, families and patients. This is going to happen unless in the future there are cheap testing kits, and everybody coming to the hospital is tested before they come in,” said Dr SK Sarin, director, Institute of Liver and Biliary Sciences (ILBS). He is the chairperson of the five-member committee that advises the chief minister on Covid-19.

Delhi hospitals have started scaling up services, including routine surgeries, Monday onwards as per the guidelines of the union home ministry.

The paediatric intensive care unit of Lady Hardinge Medical College in central Delhi emerged as a hotbed for infections last week, with 12 healthcare workers from the ward testing positive for Covid-19. Two children in the ward —a 45-day-old and a 10-month-old—were also infected, with the 45-day-old baby succumbing to the infection on Saturday morning. The baby is the youngest person to die of Covid-19 in the country so far. The father of the 45-day-old baby has also tested positive for the infection.

The authorities are yet to trace the source of the infection.

This Tuesday, the hospital reopened its out-patient clinics after putting a screening mechanism in place.

Not just healthcare professionals, but a lot of patients, with no history of foreign travel, who have visited some hospitals have also tested positive, said a senior Delhi government official.

“The increase in the number of healthcare workers, and those posted at hospitals and their contacts testing positive is a cause for concern. It might be that adequate measures for protection from the infection are not being taken by hospital authorities, including those not treating Covid-19 cases. There is an urgent need to fix these lapses,” said a district magistrate, requesting anonymity.

But it is not just the hospital, doctors and the patients visiting the hospitals also take the infection back home. For instance, a house in northeast Delhi’s Shastri Park was declared a containment zone after a cancer patient and her daughter tested positive. Their family members were placed under home quarantine.

Similarly, a few days ago, two lanes in Mahavir Enclave in the south-west district were declared containment zones after a nurse, her two family members, her neighbour and his 20-month-old son tested positive.

A senior northeast Delhi district official said, “A constable posted at Bara Hindu Rao Hospital had tested positive a few days ago. His wife and daughter are also positive.”

In the last two days, the south-west district has reported five cases of healthcare professionals and paramedic staff testing positive, while the south district has close to eight such cases.

“There are several patients who go to hospitals for treatment. Hospitals have to ensure a high standard of hygiene and sanitisation. They should also provide Personal Protection Equipment (PPE) to all the staff,” said another district magistrate.

Currently, only the healthcare workers in Covid-19 wards wear the full PPE kits, as per the recommendations of the union health ministry.