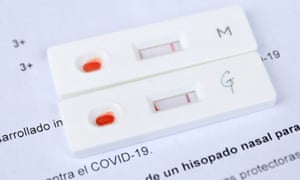 The World Health Organization has warned against issuing “immunity passports” to people who have recovered from Covid-19, as there is no evidence that they will be protected from a second infection.

The idea of issuing some form of certificates to people who have been sick with the virus – on the assumption they would be immune to reinfection – has been gaining ground in many places, including the UK, as authorities cast around for ways out of socially and economically devastating lockdowns.

But in a scientific briefing note, the WHO warned that “there is currently no evidence that people who have recovered from Covid-19 and have antibodies are protected from a second infection”.

Instead, the certificates could pose a health risk by providing unjustified assurances of protection to individuals and their communities.

“At this point in the pandemic, there is not enough evidence about the effectiveness of antibody-mediated immunity to guarantee the accuracy of an ‘immunity passport’ or ‘risk-free certificate’,” the note said.

“People who assume that they are immune to a second infection because they have received a positive test result may ignore public health advice. The use of such certificates may therefore increase the risks of continued transmission.”

There have been reports, including from China and South Korea, of patients who appeared to have recovered from the disease testing positive again.

There are several possible explanations for those results. Jeong Eun-kyeong, director of the Korea Centers for Disease Control and Prevention (KCDC), said rather than patients being reinfected, the virus may have been “reactivated”.

False test results could also be at fault, other experts said, or remnants of the virus could still be in patients’ systems but not ones that pose a danger to the host or risk infecting others.

Experts previously have raised concerns that “immunity passports” could exacerbate economic inequalities, and increase transmission risks by encouraging people desperate for work to try to deliberately infect themselves.

The idea of separating people by immunity status also has a dark history in the US, detailed in the New York Times by Stanford Prof Kathryn Olivarius.

Chile is so far the only country to launch an official immunity passport scheme. Elsewhere there have been concerns that schemes will be unreliable and impractical if only a small portion of the population has been infected.

The WHO said it was continuing to review evidence on antibody responses to the virus. Most studies have shown that people who recovered from infection have antibodies to the virus, but it is not clear if they provide protection.

“As of 24 April 2020, no study has evaluated whether the presence of antibodies to SARS-CoV-2 confers immunity to subsequent infection by this virus in humans,” the paper said, using the formal name for the virus which causes Covid-19.

In the four months since the virus emerged in the central Chinese city of Wuhan, it has killed nearly 200,000 people, and infected more than 2.8 million.

But there are as yet no countries where the disease is believed to be widespread enough to have created a large population with antibodies, or anything close to the “herd immunity” that was once considered as policy for the UK.

Recent research from Austria, based on a representative sample of the population, found that less than 1% of people were “acutely infected” with coronavirus, far below a level where immunity passports would make much difference to ending a lockdown.