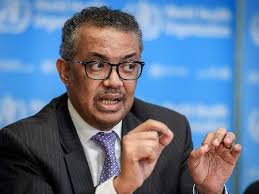 The coronavirus pandemic is “far from over” and is still disrupting normal health services, especially life-saving immunization for children in the poorest countries, the head of the World Health Organization (WHO) said on Monday.

The U.N. agency is concerned about rising numbers of cases and deaths in Africa, Eastern Europe, Latin America and some Asian countries, even as the numbers flatten or decline in some wealthier nations.

“We have a long road ahead of us and a lot of work to do,” WHO Director-General Tedros Adhanom Ghebreyesus told a virtual news conference in Geneva, adding that a second wave of infections could be prevented with the right actions.

The novel coronavirus, which emerged late last year in the central Chinese city of Wuhan, has alrady infected 2.97 million and claimed 205,948 lives, according to the latest Reuters tally.

Tedros expressed concern that the health of children was being threatened by the impact of the coronavirus emergency on vaccination programs for other diseases.

“Children may be at relatively low risk from severe disease and death from COVID-19 – the respiratory illness caused by the novel coronavirus – but can be at high risk from other diseases that can be prevented with vaccines,” said Tedros.

Some 13 million people have been affected worldwide by delays in regular immunisations against diseases including polio, measles, cholera, yellow fever and meningitis, he said.

Shortages of vaccines against other diseases are being reported in 21 countries as a result of border restrictions and disruptions to travel caused by the coronavirus pandemic, Tedros said, citing the GAVI global vaccine alliance.

“The number of malaria cases in sub-Saharan Africa could double,” he said, referring to the potential impact of COVID-19 on regular malaria services. “That doesn’t have to happen, we are working with countries to support them.”

WHO’s top emergencies expert Dr. Mike Ryan, asked about some U.S. states lifting restrictions despite a lack of contact-tracing and the government’s handling of the crisis, said the United States seemed to have a “very clearly laid-out,” science-based federal plan for fighting its coronavirus epidemic.

“The federal government and the system of governors are working together to move America and its people through this very difficult situation,” Ryan said.

But the federal system linking 50 states made the situation “complex,” he added.

Ryan also repeated an earlier WHO warning against easing restrictions too soon.