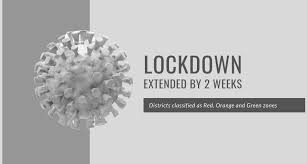 The Centre on Friday extended the nationwide lockdown for the second time, for two weeks starting May 4, but announced considerable relaxations in green and orange zones, including movement of private and public transport within a state, and further opening up of the economy.

Some of the key relaxations in green and orange zones are: opening of markets (barring malls) and offices; operation of factories and industries; movement of public (with some restrictions); services of domestic helps, barber shops and all other self-employed people; e-commerce delivery of non-essential items.

In red zones, barring containment areas, private offices can function with 33% strength, and standalone liquor shops will be allowed to open.

However, “movement of individuals for all non-essential activities shall remain strictly prohibited between 7 pm to 7 am” across all zones. The local authorities have been asked to issue orders under Section 144 of the CrPC to ensure this.

Besides, a “limited” number of activities will remain prohibited throughout the country, irrespective of the zone. These include travel by air, rail, Metro and inter-state movement by road; opening of schools, colleges, and other educational and training/coaching institutions; hospitality services, including hotels and restaurants; places of large public gatherings, such as cinema halls, malls, gymnasiums, sports complexes etc; social, political, cultural and other kinds of gatherings; and, religious places/places of worship for public.

“However, movement of persons by air, rail and road is allowed for select purposes, and for purposes as permitted by MHA,” the Ministry of Home Affairs said in a statement.

In green zones — districts which haven’t reported a fresh case of COVID-19 in 21 days — buses can ply with 50% seating capacity while private vehicle movement is allowed even for “non-essential” work. Social distancing, sanitisation and hygiene have to be maintained.

For the first time, the sale of liquor, paan and gutkha, strictly prohibited in earlier lockdown orders, is allowed. However, MHA sources said only standalone liquor stores will be allowed in red zones.

While the restrictions will not be eased in containment areas, private vehicles will be allowed in red zones with two passengers besides the driver (earlier it was just one passenger in all zones) and motorcycles with just the rider. Cycle/auto rickshaws, taxis/cab aggregators, buses, barber shops, spas and salons still remain prohibited in red zones.

As far as economic and industrial activity in red zones is concerned, the previous guidelines will remain in force. The only change is that private offices will be allowed to open with 33% staff strength, and all shops in rural areas, without any distinction of essential and non-essential items, will be allowed to operate.

While buses will not be allowed to ply in orange zones, taxis and cab aggregators will be permitted with one driver and one passenger. All other activities, including opening of markets, liquor stores and barber shops, have been allowed.

In green zones, life is expected to return to near normalcy, with all activities, barring those prohibited across the country, to be allowed. These include plying of buses and operation of bus depots with 50% capacity.

“All other activities will be permitted activities, which are not specifically prohibited/permitted with restriction in various zones, under these guidelines,” the MHA notification said. It, however, clarified that states can impose more restrictions if they deem it necessary.

Pregnant women, those above 65 years of age, and children below 10 years have been asked to stay home.

The states have also been asked to follow all SOPs issued by the MHA with regard to transit of migrant labour, students and pilgrims and transit of foreigners.

In a communication to states Thursday, Union Health Secretary Preeti Sudan had listed 130 districts in the red zone, 284 in orange zone, and 319 in green zone. The list is revised weekly.

The Centre has allowed states to restructure red and orange zones, according to distribution of cases within a zone. The MHA guidelines say that in case a district has been declared a red zone, but barring its municipal areas, the rest of the district has not seen any case in the last 21 days, the state may declare areas outside the municipal limits as orange. Similarly, orange zone districts could classify such areas as green.

The decision, sources said, has been taken as many districts have been declared red or orange because their municipalities, with higher density of population, have reported high number of cases whereas the rest of the district has remained largely unaffected. “This kind of classification will open more areas in an affected district for economic activity,” a Home Ministry official said.

The 21-day lockdown, which began on March 25, was extended by another 19 days on April 14. With the second extension, the lockdown will now remain till May 17.