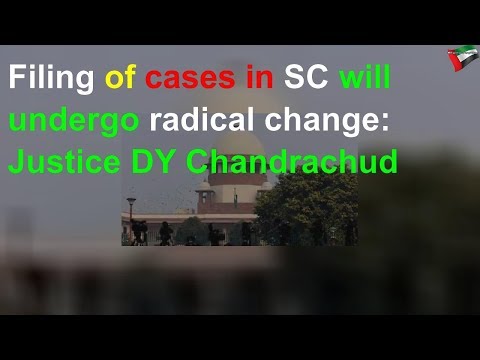 Filing of cases in the Supreme Court will undergo a radical change with the introduction and operationalisation of e-filing, chairperson of the e-committee of Supreme Court, Justice DY Chandrachud said in a telephonic interview.

The work towards this is at an advanced stage and the system is expected to be rolled out soon, he added.

“We have been working on the e-filing module for the past few months. I utilized the lockdown period to have our entire team of the registrar and almost eleven data programmers work continuously on it. The module is now being tested for its stability. We are at an advanced stage and will be commencing e-filing of all cases in the Supreme Court in the near future”, justice Chandrachud said.

He added that the concerns of all stakeholders, especially lawyers, will be taken into account and their suggestions incorporated before the system is finally rolled out.

“We are conversant of the need to ensure that we have the confidence of all segments of the Bar. We will not start any process until we have created that understanding at the bar and ensure that they understand what we are doing.”

In order to ensure that the Bar is taken on board, the court might host a webinar for lawyers in coming days to unveil the module, understand their concerns and consider their suggestions.

“Once that is done, the system will be put through an audit before it is finally rolled out”, Chandrachud added.

So what are the immediate advantages of e-filing?

“With the introduction of e-filing, people will be able to file cases in the Supreme Court 24×7 and it won’t be restricted to working hours of the court. Curing of defects in the petitions will also be through electronic mode. It will make life much easier for litigants, lawyers, law clerks and of course for our registry staff also”, he said.

The top court has also begun the process of digitization of pending cases. This did pose some challenges, Chandrachud said.

“One of the technological issues faced was to ensure that the digitized files of pending cases are brought on the same platform as the fresh cases which will be filed using that platform. We have been able to streamline that. Development of e-payment gateway for payment of court fees also posed some challenges.”

The Supreme Court , in 2017, launched the initiative of digitization and online filing but the project went into cold storage after the retirement of then Chief Justice of India, JS Khehar.

“Perhaps it all happened very suddenly and was done without the system being stabilized. We cannot say overnight that we are going to have e-filing, or that everything is going to be digitized. We cannot dump that on litigants and lawyers. That is also why I have not kept a cut-off date (for launch) so as to obviate the problems which arose in the past. We will ensure that until lawyers get familiar with the system and their clerks are in a position to take over the system we will do the handholding at the Supreme Court. We are making it as user-friendly as possible,” added Chandrachud

Some high courts have also taken up initiatives for digitizing their records of disposed of and pending cases.

“Now that has to be coupled with e-filing so that both fresh cases, and disposed of and pending cases are brought on the same platform. But there should be a standard operating procedure (SOP) for the benefit of all high courts and the district judiciary”.

The e-committee at the Supreme Court will soon constitute a panel of experts from the private sector and government agencies who will help draw up a standard operating procedure for digitization across the nation.

“Once that is done, each high court can utilise that protocol and do that process of digitsation. Once e-filing starts in Supreme Court, it will catch up in a big way in high courts,” said Chandrachud

The Supreme Court’s first major tryst with technology happened on March 24 when the Covid-19 pandemic led to a national lockdown. Hearings since then have been happening through video conferencing but many issues have arisen regarding the same.

“We were confronted with a situation almost overnight when lockdown was announced and we could not have court hearings. So instead of barring access to justice completely, we thought that the next best option was to have hearings through video conferencing”, Chandrachud said.

One concern flagged by lawyers and media is regarding violation of open court hearing when it comes to video conferencing.

Justice Chandrachud agreed that open court hearing is one of the fundamental precepts of our system but said that crowd is regulated even in physical proceeding in open courts.

“Open court proceedings are open from two perspectives – first, free access for reporting to media, and second, that access to court rooms should be available to the members of the public who have an interest in the proceedings. We cannot have, say 5,000 people coming into a court room because we have space constraints.”

He said that the objective must be to ensure that the court does not detract from the fundamental principles of an open court.

“That is not to say that anybody who wants a link to the hearing will be entitled to get it. Technology also has constraints. As long there is no bar on media on one hand and members of public who would want to hear the matter of public interest, I think the principle of open court room is going to be facilitated.”

Justice Chandrachud was part of the Supreme Court bench which passed an order on April 6 legalising use of video conferencing to hear cases during Covid-19 lockdown.

“We gave legal sanctity to video conferencing by an overarching judicial order which sort of covered all high courts in the country. But we left it to the discretion of every high court on various nuances because we did not want to handhold the high courts and foreclose their discretion in adopting technology which they felt was best suited to their purpose.”

The e-committee of the Supreme Court has now finalised model rules on video conferencing.

“These rules are being circulated to all high court chief justices for adoption so as to ensure uniformity in video conferencing but subject to such situational modifications as may be necessary from state to state,” said Chandrachud

However, he added that video conferencing is not a replacement for physical hearings.

“A court is a physical space. Video conferencing and technology in my opinion are an amazing supplement to the functioning of courts. It can be used to examine a witness who is abroad, medical experts who might have to travel to give evidence and for disposal of petty cases which do not require application of judicial mind. Delhi has set up a system for online payment of traffic challans which wipes out a lot of cases from the system.”