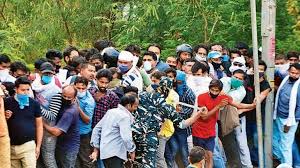 The Delhi Police scrambled to prepare a report and suggest to the AAP government that the timing for alcohol sale be extended and sufficient stocks maintained at shops to avoid massive crowding. It also asked store owners to ensure social distancing at all costs.

This was after a multitude of impatient tipplers in serpentine queues – some stretching up to 3 km – jostled and pulled at each other to get hold of their favourite brands, in total defiance of social distancing norms.

The mad rush triggered traffic chaos, police action, political slugfest and fears of a spike in Covid-19 transmissions as 150 of the Delhi’s 859 booze shops opened in some areas after a long gap of 40 days.

Ramvir Singh Bidhuri, Leader of Opposition in Delhi Assembly, said, “Huge crowds completely broke lockdown norms. There was an open violation of social distancing. Liquor sellers and buyers both are at risk. It can increase coronavirus cases by 10%.”

None other than the country’s health minister, Dr Harsh Vardhan, said the Delhi government rushed into opening liquor shops at a time the National Capital was still in the red zone. “It should review its decision in view of the huge crowds outside these outlets. This increases the risk of Covid-19 spread,” he said.

Delhi chief minister Arvind Kejriwal called the chaos unfortunate and said shop owners will have to take responsibility. “If social distancing is violated, we will shut the shop, seal the area and revoke relaxations,” he said.

The Ministry of Home Affairs (MHA) and the Delhi government had said that not more than 5 people would be allowed to wait outside a shop, while masks and social distancing were mandatory.

The posh locality of C-Block, Vasant Vihar, South Delhi, had had a deserted look since the day the lockdown was announced.

But all hell broke loose on Monday.

Similar were scenes elsewhere in the city. Queues started forming at 7 am itself, though shops were expected to open at 9 am. Many liquor shops in Mayur Vihar, Krishna Nagar, Karol Bagh, Daryaganj, Paharganj, Kotla village and other areas had to be shut as cops used force to control massive overcrowding. Some also tried to barge into shops.

At Defence Colony, Malviya Nagar and Govindpuri, the day started with long lines, which devolved into a crush by 10 am, and the police ordered a shutdown by noon.

At Daryaganj, the lines stretched from Delhi Gate to Golcha Cinema.

There were more than 600 people in a line by 11 am. More congregated on the road, and yet more waited across the road, having handed over their money and trust to some in the line.

The love for liquor overrode the general distrust of handing money to a stranger, as conversations about the long wait for alcohol and troubles at home flowed freely. Many purchased crates, while others pooled in money for a taste of the much missed.

Harish, who came to the vend early, said that this was “very much needed” after the 40-day curbs. “We have been stuck at home for weeks. Some alcohol will help,” he said.

“How long can we stay dry? We are here only for a couple of bottles,” said Rajesh, a businessman. Yogendra, who works in Daryaganj, said he had pooled in money to buy alcohol. A lot of daily wagers and rickshaw pullers also found themselves in the line on someone else’s dime.

The love for the bottle was also apparent from those who travelled long distances to stock up.

Inder Kumar and his friend Satish, property dealers from Geeta Colony, took the latter’s scooter to Laxmi Nagar at 7.45 am. There they found a line that was “more than 2 km long”. Undaunted, they crossed the Yamuna and reached the Daryaganj store.

Their diligence was rewarded when, at about 10 am, they were able to buy a dozen bottles of whiskey. “We have to stock up. What if they close the liquor stores tomorrow? I bought some for myself and some for my friends and neighbours,” said Kumar, while balancing the cases on the scooter.

At Daryaganj, about a dozen policemen and two PCR vans tried in vain to control the crowd that kept getting bigger.

Some even tasted the heat of the stick, but remained faithful in their wait for the alcohol. By 12.30, the store was shut down, with the police unable to control the crowd.

Similar scenes played out at Kashmiri Gate in north Delhi, where the crowd surged, prompting the SHO to order the theka to be shut down by 12.30 after threatening to lathicharge the crowd.

In East Delhi’s Krishna Nagar, the lines began at 6 am, but the store was closed at 11 am by the police, as the crowd refused to follow distancing norms. At Jheel Chowk and Chandar Nagar, the police had to push crowds back with sticks.

By 1 pm, the East Delhi DCP ordered closure of all liquor stores in the district. According to an order issued by the government, liquor shops were directed to deploy marshals at the outlets to maintain social distancing. However, very few outlets could arrange resources for crowd management.

The government had also directed four state-run agencies, which are responsible to sell liquor, to deploy adequate marshals at these shops.

In contrast, Noida saw more discipline, like at Sector 18 Market. Lines started to form by 7 am, at the three thekas. With money in their hands and a smile on their lips, customers some in their pyjamas stood in serpentine queues inside circles made by the shopkeeper for social distancing.

As soon as the owner opened the shutters, there was jubilation in the air and those who were standing in front started clapping to show their support and happiness.

Smriti, a resident of Sector 15, said that the “stock at home” had finished in the long lockdown.